×
You are here: Home / Asian / General Tso's Chicken Recipe
General Tso Chicken recipe is a popular North American-Chinese food takeout recipe that is widely popular. It has a sweet, spicy, and slightly ginger-y taste and is so good.
Anjali
Jump to Recipe Pin Recipe
15 minutes 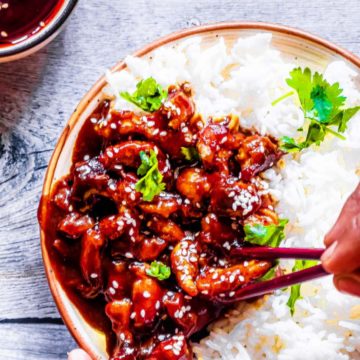 General Tso's Chicken - Crispy Fried Chicken tossed in a sweet and spicy General Tso sauce. This Favorite Asian recipe is super easy to make and tastes beyond delicious. It tastes almost like Sesame Chicken but the sauce is a little spicier and has a distinct flavor. Generally, it is served with White Rice and Steamed Broccoli.😍😍😍

You can serve this General Tso's Chicken with Jasmine Rice or Coconut Rice or my favorite Thai Fried Rice. 😋😋

After Orange Chicken, Sweet Chili Chicken, Thai Peanut Chicken, General Tso's Chicken is something that I wanted to try for a long time.

I have had General Tso's on various occasions. But, I could never imagine that the recipe for General Tso's Chicken would be so easy.

Going by the name, I had thought that it would be some complicated recipe where I would need many fancy ingredients. Well, I was so wrong...!

Turns out, this recipe is simply nothing.

It's just frying Chicken in hot oil and tossing it in a sweet and slightly spicy General Tso's Sauce.

When I served it to my husband he was like - "This is just like a restaurant, How did you do this? Please save some I want to have some tomorrow as well".

That was such a proud moment for me. After all, praises make us happy. Doesn't it?😍😍

🤔 What is General Tso?

So, I know you are curious about the term - "General Tso".

What is it? Is it a name of a person? Is it sauce? What is General Tso?

Well, you are close. General Tso's Chicken comes from Tso Tsung-t'ang who was a well-respected Chinese military leader and statesman.

But, he had nothing to do with chicken. It was a popular chef named Peng chang-keui who created this "general" chicken dish.

When he migrated to the US he had to make it a little sweeter to cater to the US palate.

Now coming back to the original question - Why the name General Tso?

So this Chef belonged to the same town as Tso Tsung-t'ang. And, that's the reason he decided to name this chicken dish - General Tso's Chicken.😍😍

🤔 What is exactly General Tso Chicken?

That is the closest definition of General Tso's Chicken that you can get anywhere. It is widely popular all over the world.😍

And, that's exactly what makes it so special.

🤔 What is General Tso Sauce?

Now that is an excellent question. General Tso's Chicken is nothing without the sweet, spicy, and soury General Tso Sauce.

So what is so special about this sauce?

Let's do the name-calling of ingredients. Shall we?

🤔 What is the Difference Between General Tso's Chicken and other Chinese Dishes?

So, basically, General Tso has a sweet and slightly spicy sauce.

The taste of ginger is predominant in General Tso's Chicken.

Other Chinese Dishes such as Sesame Chicken or Asian Chicken have slightly spicy gravy as compared to General Tso's Chicken.

🤔 How to Make General Tso's Chicken at home?

General Tso's Chicken is just a two-step recipe. And, believe it won't take you longer than 30-minutes even if you try hard.

Other Recipes You can try:

Gochujang Chicken Meatballs - Meatballs tossed in a sweet and spicy Korean sauce made with Gochujang Paste.

Sweet and Sour Chicken - One of my favorites. The Pineapple makes all the difference here.

Firecracker Chicken - This is one of my most loved Asian Chicken recipes. Readers love the taste of this delicious and yummy sauce.

If you are making this recipe, then please leave a rating below. Also, take a snap and share it on Instagram with #recipemagik. Tag us @recipemagik so that I can see how it turned out. 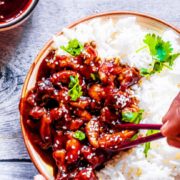 You can serve General Tso's Chicken with White Rice and Steamed Broccoli.

If you want to store this recipe, then I recommend storing this for just 2-3 days. Also, make sure you cover the bowl with the chicken. Cover it with cling wrap or plastic wrap and make sure there is no air gap around. Place it in your refrigerator. And, before serving, make sure you thaw it out or warm it through in the oven.