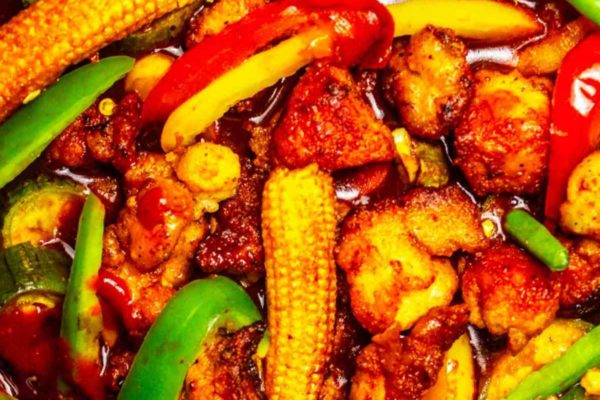 Hunan Chicken is a favorite Asian American recipe for dinner. This Easy Chicken Stir Fry with veggies and sauces is a perfect weeknight dinner recipe. This is a spicy Chicken recipe and tastes excellent with some steamed Jasmine rice or noodles.

Hunan Chicken is one of my favorite Asian takeout recipes. You can easily make this delicious Chinese recipe at home and enjoy it with your family. I love to make Asian food recipes for dinner. My kids especially love Asian food recipes for dinner. Also, try these favorite takeout recipes like Honey Bourbon Shrimp or Thai Peanut Lime Shrimp Curry or Honey Bourbon Chicken in Crockpot or Sweet and Sour Chicken Meatballs or Thai Sweet Chili Chicken or Orange Chicken or Firecracker Chicken Meatballs or Honey Sriracha Chicken or Honey Garlic Chicken

This Hunan Chicken recipe is one of our favorites. It's surely spicy but for a spicy food lover family like us, this is surely a special recipe. It's full of flavors!!!

🍱 What is Hunan Chicken made of?

Hunan Chicken is a popular Chinese takeout recipe made using crispy fried Chicken which is stir-fried with veggies. This dish originated in the Hunan Province of China and has been one of the most loved Chinese recipes all across the globe.

What is the Difference Between Hunan Chicken and Schezawn Chicken?

Hunan Chicken is spicier as compared to Schezwan Chicken. Hunan Chicken used Chili Paste which is generally made using fresh chilis. So it's super spicy and hot

Whereas, Schezwan Chicken is made using Dried Red Peppers and Sichuan Peppercorns. So the Schezwan sauce is milder but is a bit tangy.

Also, Hunan Chicken is basically a stir fry of chicken and veggies. Whereas in Schezwan Chicken no veggies are added.

Hunan Chicken doesn't include any nuts or toppings whereas Schezwan Chicken is topped with Toasted Sesame Seeds or sometimes Peanuts or Cashew Nuts.

See recipe card for quantities. Also, watch the video for a quick visual.

Remember to not overcook the veggies. They should remain crispy. So keep the heat on high all the while.

Hint: Cook the Chicken in batches. If you want you can make this spicer by adding more chili paste. The mentioned quantity will account for a mildly spicy Hunan Chicken.

You can cook Hunan Chicken. Cool it down to room temperature and store it in an air-tight container in the refrigerator for 1 week. You can also freeze this for up to 3 months

You can make the Hunan Sauce in advance and refrigerate this for up to 1 week. You can also precook the Chicken, double wrap it with foil and cellophane, and freeze this.

Yes, absolutely! Hunan Chicken is spicier because of the Chili Paste (Sambal Olek) which is used in making the Hunan Sauce. Kung Pao Chicken is not too spicy. It's like a basic stir fry. The only heat is because of the Dried Red Peppers and Dried Sichuan Peppercorns.

Whereas Schezwan Chicken is has a hint of sweet and tangy flavor to it. However, it too is spicy and has a numbing effect on your mouth.

Is Hunan or Schezwan Better?

If you want to know in terms of taste, then Schezwan is better because it has a wholesome taste to it. However, if you love extremely spicy food, then you will love Hunan Chicken better.

I hope you liked this recipe and shall make it soon. If you happen to make this recipe, then comment below and rate this recipe. Also, tag me with #recipemagik On Instagram. 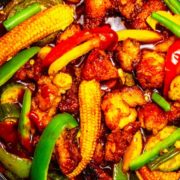 Hunan Chicken is a favorite Chinese takeout recipe. Crispy fried chicken is stir-fried with veggies tossed in a spicy Hunan Sauce. Hunan Chicken is not too spicy because of the veggies which are stir-fried. The Hunan Sauce tastes spicy and delicious. This Hunan Chicken is served with Rice or Noodles.
No ratings yet
Print Pin Rate
Prep Time: 10 minutes
Cook Time: 15 minutes
no resting time required: 0 minutes
Total Time: 25 minutes
Servings: 4 people
Calories: 385kcal
Author: Surup

If you want you can make this spicer by adding more chili paste. The mentioned quantity will account for a mildly spicy Hunan Chicken. Cook the chicken in batches. Do not crowd the skillet while cooking the Chicken. You can make the sauce in advance and add it right into the stir-fried Chicken and Veggies Do not overcook the veggies, they should remain crunchy. Keep the heat on high while cooking the veggies. Do not add extra salt or the veggies will start releasing water and shall not crisp up.