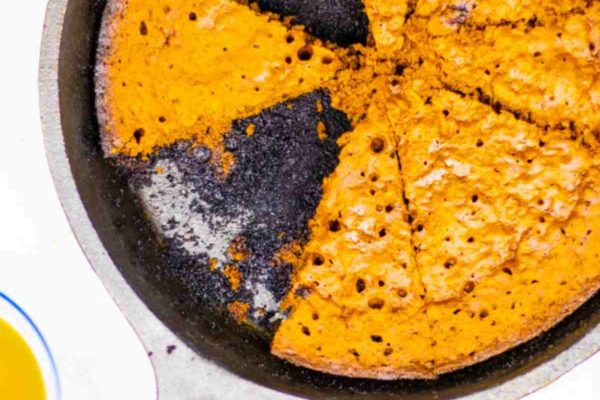 Classic Southern Buttermilk Cornbread with Honey made in the Cast Iron Skillet is the perfect side to all your holiday dishes. Be it aside a warm pot of Chili or Stew or a Hearty bowl of Fall Soup, Cornbread is one of our favorites and most loved side. This Buttermilk Cornbread has a moist and fluffy center while the edges are crispy, crusty and buttery.

Cornbread is one of those recipes which we make so often that we often forget to think about it. Its like a staple side dish to our holiday dinner table. It's one of the most popular Southern Side Dishes.

And when the fall season rolls in this becomes almost a regular. I love to serve this with Roasted Chicken, Curries, Stews, Soups, and ofcourse, Chili!

This is one of those recipes which is most often underestimated, but without this as a side, all other main dishes fails to cast their charm.

Difference between Northern and Southern Cornbread

Cornbread tastes different depending on which part of the country you are. if you're in North, you'll be likely be served a sweet Cornbread which is moist, soft and very cakey.

This is because its used mostly using jiffy mix and if made from scratch they add a lot of sugar.

Also Northern Cornbread is baked in a baking dish.

Many of the items fresh berries are added to it. Summer Blackberry Cornbread is a typical sweet Cornbread recipe made just like the Northerners.

Generally no sugar is added to Southern Cornbread recipe which makes it for a hearty and favorable side dish besides meaty dishes like Chili or topped over Collard Greens.

Cornbread is also used to make Southern Cornbread stuffing for Thanksgiving or for a classic old school treat, Cornbread is just crumbled over buttermilk and served! YUMM!!!

I think more than most times while preparing a meal, we focus on the main dish and ignore the sides. Whereas it should be the other way around.

This Easy Buttermilk Cornbread is sooo good. Its super simple and delicious in terms of taste and flavors. I love the fluffy and soft cornbread and when you add butter and honey over it before serving!! It's just heavenly...!😋

The sides should be pleasing enough for you to get to the mains. The mains should be simply hearty and comforting so that you eat to your heart's content!

Southern Recipes has that simplicity in itself. This is why, its so popular and loved.

See recipe card for quantities. Also, watch the video for a quick visual.

Remember that the Skillet will be very hot. So remember to wear Oven Mitts while removing it from the oven.

Hint: You can also heat the skillet on the Stovetop with some oil and butter and then pour the batter and then place it in the oven to get baked.

You really donot need any mix when you can simply make it from scratch with so much ease. Old Fashioned Southern Cornbread is a Southern Soul Food Recipe which we love! My Mom still uses a skillet to make Cornbread every single time!

🧊 How to Store Cornbread?

You can easily store Cornbread for a long time. To freeze Cornbread, wrap with foil or plastic wrap and freeze for upto 3 months.

You can also refrigerate in an air-tight container for 1-2 weeks.

What to serve with Southern Cornbread?

Hearty and Meaty Mains go perfect with this sweet Southern Cornbread recipe with buttermilk. Crumble and top over Collard Greens or serve with a meaty Chili or Blackeyed Peas or with BBQ Chicken or BBQ Pork or Cheesy Green Beans or

Chicken and Shrimp Gumbo in Crockpot

What's the difference between Cornbread and Southern Cornbread?

Do Southerners Put Sugar in their Cornbread?

These has been so much said and told about Sweet and Savory Cornbread.

However, I am always drawn towards the slightly sweet Southern Cornbread. Its sweet but also fluffy and soft.

The Southern Cornbread is definitely got that sweetness because of Honey and Brown Sugar.

Why is Cornbread so Popular?

Cornbread got popular during the civil war, when this was made very easily and cheaply with a very few ingredients. It stood as a perfect side or just a meal in itself. And since then, this has become a part of life.

Yes! Some Southerns love their Cornbread without Buttermilk. They simply use sweet milk and it works just perfectly everytime to make sweet and fluffy cornbread. 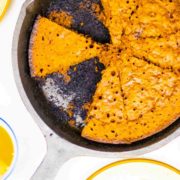 Soft and fluffy in the center and crispy and butter on the edges, this Southern Buttermilk Cornbread in Cast Iron Skillet is one of the best Southern side dish recipes. It's so easy to make and tastes so delicious.
5 from 1 vote
Print Pin Rate
Prep Time: 10 minutes
Cook Time: 20 minutes
no resting time required: 0 minutes
Total Time: 30 minutes
Servings: 12 servings
Calories: 256kcal
Author: Anjali

*Traditional Cornbread isn't cake-y. However if you want a more moist cornbread you can add in another egg and 1/8th cup of milk. *Traditional Southern Cornbread recipe, doesn't add any sugar to it so it pairs well with savory dishes. However if you like a sweet cornbread, you can add a bit of honey or brown sugar as per your taste. *Classic Southern Cornbread recipe uses melted shortening. Its exactly what makes it taste so comforting and delicious. If you want, you can skip oil and butter and use 1/4 cup of melted shortening in this recipe. You can even use melted shortening to grease the skillet before use.  For some more extra burst of flavors add some bacon drippings to the cast iron skillet before using it. If you do not have Buttermilk, then DIY Buttermilk. Combine 1 teaspoon of White Vinegar or Lemon Juice with 1/2 cup of Whole Milk. Allow it to stand for 2-3 minutes and stir before use. You can preheat the skillet on the stovetop. Grease with oil or butter and heat on the stovetop.  You can skip buttermilk and use whole milk instead to make Southern Cornbread without Buttermilk This Southern Buttermilk Cornbread is served perfectly with butter, honey, maple syrup or even Blackstrap Molasses. Serve it with your favorite southern mains like Turkey Chili or Southern Fried Chicken  or Sticky Pork Belly or Barbecue Pork Ribs or Prime Ribs Adapted from The SpruceEats