Crockpot Black Eyed Peas with Bacon is a hearty comforting dinner recipe. Serve this with rice or Southern Buttermilk Cornbread and you have a complete meal.

Black eyed peas is believed to fill your year with new hope and good luck especially if you eat it on the New Year's Day. In our home we usually serve this with traditional Ham, along with any particular greens such as collard greens.

I would suggest you to soak your black eyed peas overnight or for at least 8 hours. Or else you won't get the texture that you are looking for.

But, if you were to make this exact same recipe in the Instant Pot then you'd be good even without soaking your beans.

See this article where I have shared how to soak and cook beans in the crock pot or instant pot or microwave or rice cooker or stove top.

I like my black eyed peas spicy or else they taste bland and just like beans. Therefore I like to add in a tablespoon of my homemade cajun seasoning for added taste and flavor.

If you want to have black eyed peas that doesn't taste just like beans then you have to add in some spices.

Cook for 3-4 hours on high in the slow cooker.

Stir in crispy cooked bacon and serve with chopped celery.

Do Black Eyed Peas needs to be soaked?

Yes. I prefer soaking my black eyed peas for best texture and taste. Many people have asked me this question where all they want to do is just throw in dry beans in the crockpot.

But, trust me don't do that. Even if you cook your black eyed peas for 8 hours in the slow cooker the peas still won't be soft.

Can you put peas in slow cooker?

Can you cook black-eyed peas too long?

Yes. If you are using soaked black eyed peas then you don't need to cook it for so long.

And if you do cook it long enough then you run the risk of beans getting mushy. 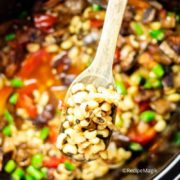