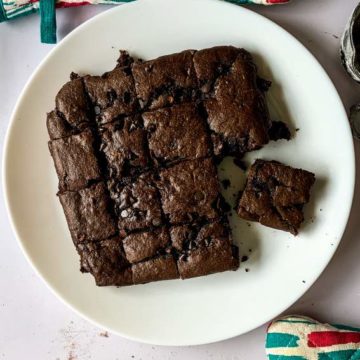 These Banana Brownies are Vegan Brownies. The perfect combination of bananas and dark chocolate gives you a balanced taste or bittersweet brownies.

Vegan Banana Brownies are healthy and delicious Brownies. These are super chocolaty and delicious. These get ready in no time and are so yum!

This is not your Banana Cake or Banana Bread. Banana Brownies will take your love for Bananas and Brownies to a whole other level.

The best part - these are made with simple pantry ingredients. I must tell you, the results are so amazing, that I am in love with the idea of these Eggless Banana Brownies.

See that gorgeous crinkle on top of my brownies, that's the classic tip that'll tell you if your brownie is fudgy or not.

Brownies will turn out Fudgy only if they have more fat and less flour. I love my brownies Fudgy!

If you want chewy and cakey brownies, you can use more flour.

Can you freeze brownies?

How to make No sugar brownies?

If you want to make no sugar brownies, you can use natural sweeteners such as fruits to sweeten your brownies.

Fruits like Banana or Pear or Coconuts or Cherries go excellent with dark chocolate brownies.

It combines with the bitterness of dark chocolate and gives you a perfectly balanced taste.

You can also use Honey or Maple Syrup as these too are natural sweeteners and are a great replacement for sugar in brownies.

Did you know that an overripe banana has so intense flavors and sweetness, that you can make a complete dessert with just one Banana and you do not need any extra sugar for that recipe? Yeah!

In this Banana Brownie, I have used 1/4 cup of brown sugar. It gives an extra caramelized flavor to your banana brownies.

You just need your usual brownie ingredients and an overripe Banana.

If your Banana is not overripe, then pop it in the oven for 2 minutes and then use it.

After your brownies are ready, take them out, chill them for about 5 minutes and cut it into squares.

Enjoy your Banana Brownies with some Vanilla Ice Cream on top. 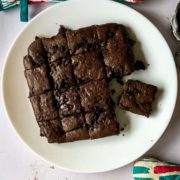