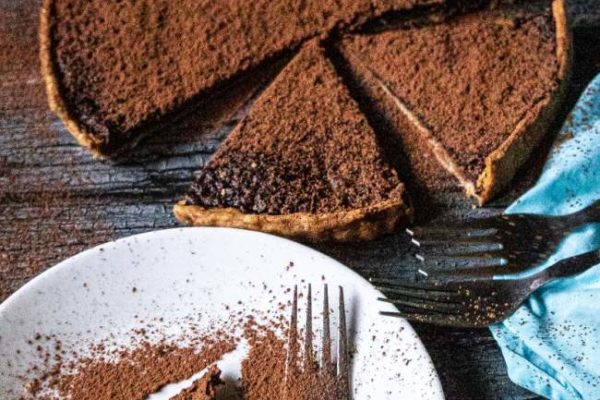 Vegan Chocolate Chess Pie is a classic Southern Dessert that can be enjoyed all year long. It's such a simple and easy recipe that every time I make it I think, maybe next time, I will add this and try. Or maybe I will skip this and try.

This recipe has been passed down through the generations. And, the best part about trying such an age-old recipe is that you can customize it as per your wish. For instance, my nanna never made a vegan chocolate chess pie.

Have you tried my BEST Dark Chocolate Brownie Pie or Chocolate Bourbon Pecan Pie. These are so delicious and perfect for the holidays.

Traditionally the four basic ingredients for this pie are Cocoa Powder, sugar, butter, and eggs. But, I wanted to try something new. Therefore, I decided to make a vegan variant of this super-popular dessert.

My Chocolate Chess Pie recipe used vegan butter, almond milk, and no eggs. I know what you're thinking. How will the pie hold up its shape if we are not gonna use eggs? Well, I have a special trick. No flax eggs. I just use some cornstarch. Cornstarch is a binder and helps the pie hold its shape.

You should check out my Vegan Sweet Potato Pie with Coconut Milk, the recipe was a hit on social media overnight.

I have always loved the idea of challenges while baking. I told myself that If I can make this vegan chess pie anywhere near to what my nanna used to make, I am gonna reward myself with a brand new Kitchen stand mixer.

After spending two nights in my kitchen testing this recipe my final judges were my husband and my sister who had come down from Oklahoma.

Well, my husband can be a bit charming at times and tell me it's good when it's actually not that good. But, my sister isn't. When she had it, she was like - "Is this vegan? I just cannot figure that out!" People were so happy with my recipe. They couldn't tell it was vegan.

I was so confident that finally I can post this on my blog and share it with my readers. Finally, here I am after making this recipe the 10th time, typing away my experiences of baking this vegan chocolate chess pie.

🥘 What do you need to make this Pie?

🗒️ Other Alternative to this recipe:

If you are making this recipe, then please provide a rating below. Also, tag me on Instagram @recipemagik with #recipemagik and share your pie photo. 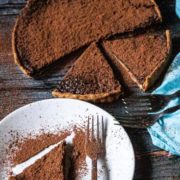 *Learn how to Make Homemade Pie Crust here. TO MAKE VEGAN WHIPPED CREAM: You will need 1/2 cup Aquafaba (liquid from 1 can of chickpeas), 1/8 Teaspoon Cream of Tartar, 3/4 Cup Powdered Sugar, 1 Teaspoon Pure Vanilla Extract. In a pan whip Aquafaba with Cream of tartar until light and foamy for about 3-4 minutes. Add powdered sugar (little at a time) and Vanilla. Beat until you see stiff peaks. Use your favorite nozzle. Snip the edge of a piping bag. Pour the frosting into the bag with a nozzle. Make a beautiful frosting on your vegan chocolate chess pie.