×
You are here: Home / Desserts / Coconut Macaroons without condensed milk
Coconut Macaroons - Crunchy on the outside and perfectly soft on the inside these macaroons are like happy coconuts served on a plate.
Jump to Recipe Print Recipe 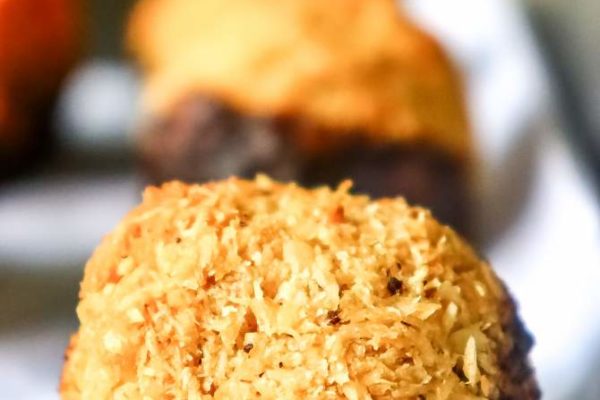 Perfectly crisp and toasty on the outside and soft on the inside, you cannot get a coconut macaroon recipe anywhere else.

Best Enjoyed with chocolate Mousse this recipe is a winner.

It is made with Unsweetened coconut and I have not used any sweetened condensed milk. Have you tried my No-Bake Apple Coconut Squares, Pear Coconut Chocolate Bars, White Chocolate Lemon Coconut Truffles

Coconut Macaroons are easy and scrumptious desserts. It's just like Coconuts. They have a crunchy - golden exterior with a soft, moist, and chewy interior! Top that with some Chocolate and it's so amazing. Coconut Macaroons are the best recipe which you should be making with desiccated coconuts.

Hey guys! This Summer season I am truly crushing over Coconuts. I mean, I want to bake every dessert possible with Coconuts. Till now I have baked Lemon Coconut Loaf Cake, Key Lime Coconut Tart, Key Lime Coconut Cupcakes, and Lemon Coconut Truffles. I think Coconuts are the best ingredients for desserts. It gives an earthy sweetness to your desserts, while also making it crunchy and nutty giving you that perfect chewiness you want in your desserts.

Today I'll be teaching y'all how to make the best and truly the easiest Coconut Macaroons. Coconut Macaroons are not only a delicious treat for summers but makes for a scrumptious holiday treat as well.

Be it for the holidays or summers when the kids are getting bored at home, this yummy treat is surely going to get them excited.

Coconut Macaroons are not at all like the exotic french pasty - Macaroons. Rather, this one is way easier. It has a crunchy and crispy exterior with a chewy and sweet interior. Dip it in some melted dark chocolate and that'll make this taste even better.

Whenever I bake these Coconut Macaroons, I make sure to dip them in Chocolate. This just adds to the goodness of this dessert.

The best part is there is no strict rule you need to follow to make these Coconut Macaroons. I like to make my Meringue and then fold it with the shredded Coconut. However, you can skip this as well. Just combining the Egg whites with some sugar and making a frothy mixture also works just fine.

Also, there are a lot of questions about how long should you bake Coconut Macaroons. They should be baked as long as they develop a lightly golden crust on top. I Bake my Coconut Macaroons at 160C or 320F, which is a very controlled temperature and it makes sure that your Macaroons do not get overbaked or are not even underbaked.

How to bake the best Coconut Macaroons

So to bake the best Coconut Macaroons you need to follow these 5 easy steps.

First - Take Egg whites in a mixing bowl and beat it using a handheld mixer. Once it gets frothy, add the Granulated Sugar, Salt, and Vanilla Extract and beat at high speed until it gets foamy and forms stiff peaks.

Seconds - Toast the coconuts in a skillet over medium flame. Make sure that they do not turn all golden brown, just a minute of toasting will get your shredded coconuts all fragrant and ready for use.

Third - Fold the shredded and toasted coconuts with the Meringue and mix well until combined using a spatula. Once mixed, make small balls using a tablespoon and your Palms or use a Melon Scooper and pick out a small dollop and make it into a ball.

Fifth - Melt some unsweetened Dark Chocolate Chips with some butter and dip the bottom of your Coconut Macaroons in it. Coat nicely and allow it to set. 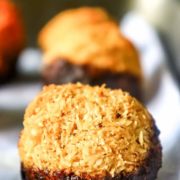 Coconut Macaroons - Crunchy on the outside and perfectly soft on the inside these macaroons are like happy coconuts served on a plate.
No ratings yet
Print Pin Rate
Prep Time: 10 minutes
Cook Time: 25 minutes
0 minutes
Total Time: 35 minutes
Servings: 12 Macaroons
Calories: 400kcal
Author: Anjali

Enjoy these Coconut Macaroons with some Chocolate Mousse.