×
You are here: Home / Meal Planning / Best Chicken Tikka Masala Recipe Ever
Juicy grilled chicken marinated with yogurt and other spices and then cooked in a delicious sauce.
Jump to Recipe Print Recipe 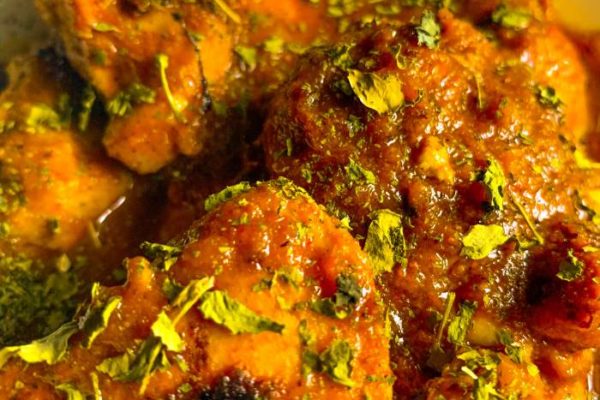 Chicken Tikka Masala is a rich and spicy Indian Chicken recipe where you can taste the sweet and tangy tomato gravy marinate over the charred chickens. The juicy, chewy and soft chicken coated in the delectable chicken tikka masala sauce tastes heavenly. Serve this with Fried Rice or Soft Homemade Naan Bread

Chicken Tikka Masala has an interesting story behind it. Many say that this is an Indian recipe. Some argue that this is a Pakistani recipe and some have no clue about it.

But, after a lot of research and actually talking to food historians of this big vast culinary world, I have finally found the Origin story.

The story is that there was a tired bus driver or probably a taxi driver who sat in this restaurant digging in some chicken with his father on the other side. He was unhappy with his chicken so his dad suggested he add in some tomato soup which he was having. And, that is how the Chicken Tikka Masala was originated.

This tantalizing chicken recipe is not complete without some rice. You can even enjoy it with some stuffed Kulcha or Naan.

The dominant taste about Chicken Tikka Masala is of the grilled chicken (also called Chicken tikka) and the sweet & savory tomato gravy.

My Chicken tikka recipe will always have some sweetness in it. I think a bit of sweetness enhances the flavors of the chicken.

If I am ever making Chicken for myself, I prefer grilling my chicken. I love those grilled lines on my chicken. Not only do they taste better but I really enjoy the taste of those charred parts.

I prefer that the juices of my gravy make way into my chicken. So that when I take a bite of the chicken, I taste the spicy, tangy, tomatoey sauce as well.

Hence, after I have grilled my chicken, I prefer soaking them in my gravy for as long as I can.

And, after I've added the grilled chicken in my Chicken tikka masala sauce I immediately cover the lid.

Now, put the flame on low. And, patiently wait for my chicken to soak up the sweet & spicy sauce. Moreover, this also makes sure that my chicken gets evenly cooked.

HOW TO MAKE CHICKEN TIKKA MASALA (STEP BY STEP GUIDE)

Can I cook this in the Crock Pot?

Now, just dump the Curry and the Chicken in the Crockpot. Stir in Heavy Cream and Chicken Broth. Slow cook on Low for 4 hours or on high for 2 hours.

Garnish with some more heavy cream and freshly chopped cilantro and serve.

You can easily store this in the refrigerator. After you've made this, allow it to cool down to room temp. Then transfer to an airtight container and refrigerate for about a week.

You can make the Tikka Masala Sauce and freeze it in an airtight jar. Thaw it overnight in the refrigerator and mix with chicken broth to make a fresh curry. 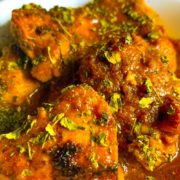 For Chicken Marination or to coat chicken

For the Tikka Masala Sauce or Curry

I like my Tikka Masala sauce a little spicy as well as sweet. So, I have added 2 tablespoon of Paprika along with 2 tablespoon of sugar. Just to balance it out. You are free to increase or decrease it as per your choice. Make Ahead Instructions: You can make Chicken Tikka Masala Ahead of time. Make the sauce, strain it and store in an air-tight container. Refrigerate for 2-3 days. Freeze for 3 months. When ready to cook allow the sauce to thaw overnight in the refrigerator.  Cook Chicken and add the sauce. Follow the remaining instructions as mentioned in the recipe card. You can make this in the slow cooker as well To make this in the slow cooker, cook your chicken in a skillet until crispy and keep it aside. Make the sauce as per instructions. Strain it and pour it in the crockpot. Add in chicken pieces, chicken broth and heavy cream. Cook on LOW for 4 hours or on HIGH for 2 hours. Garnish with freshly chopped parsley or cilantro and serve with rice.