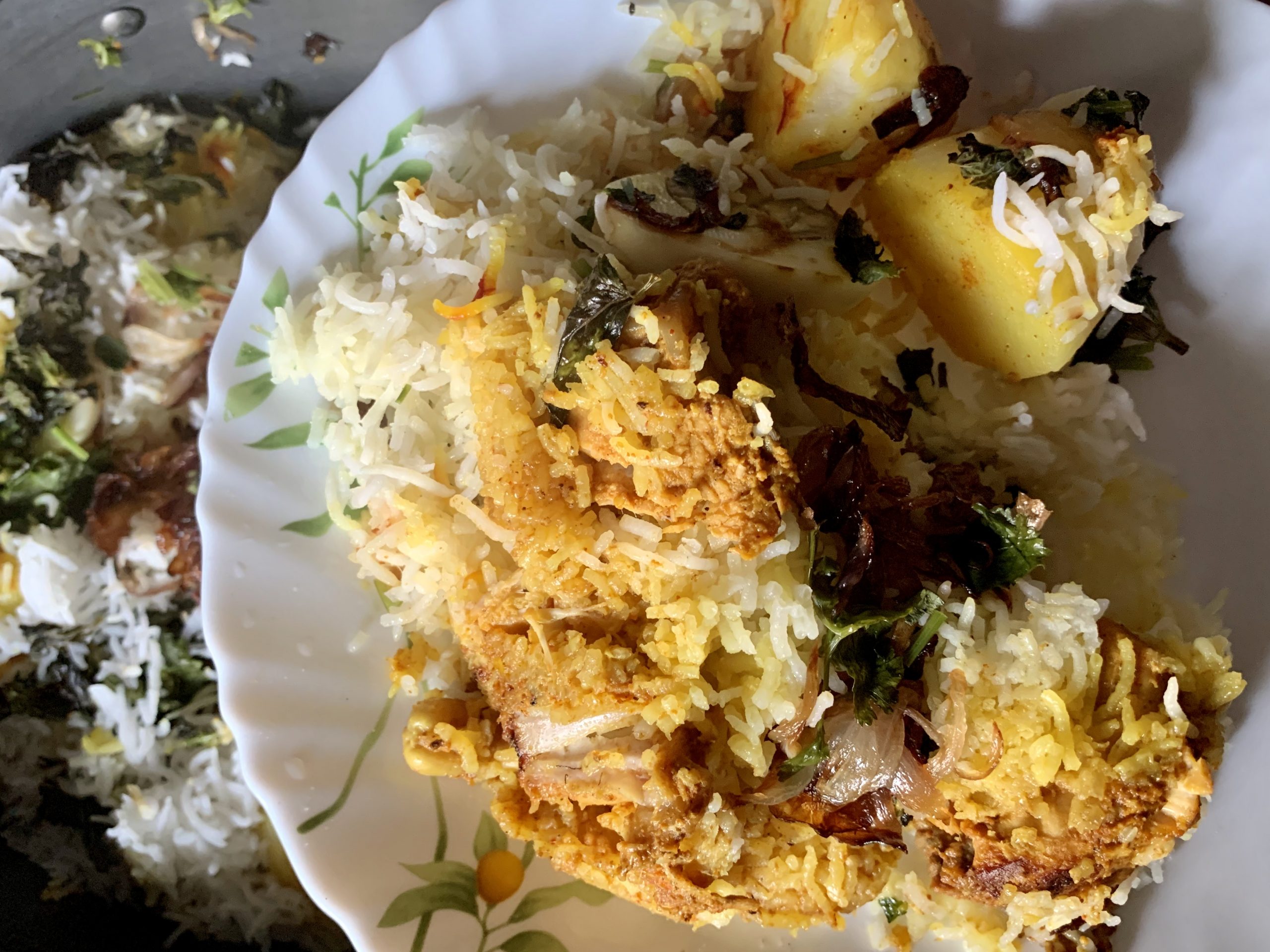 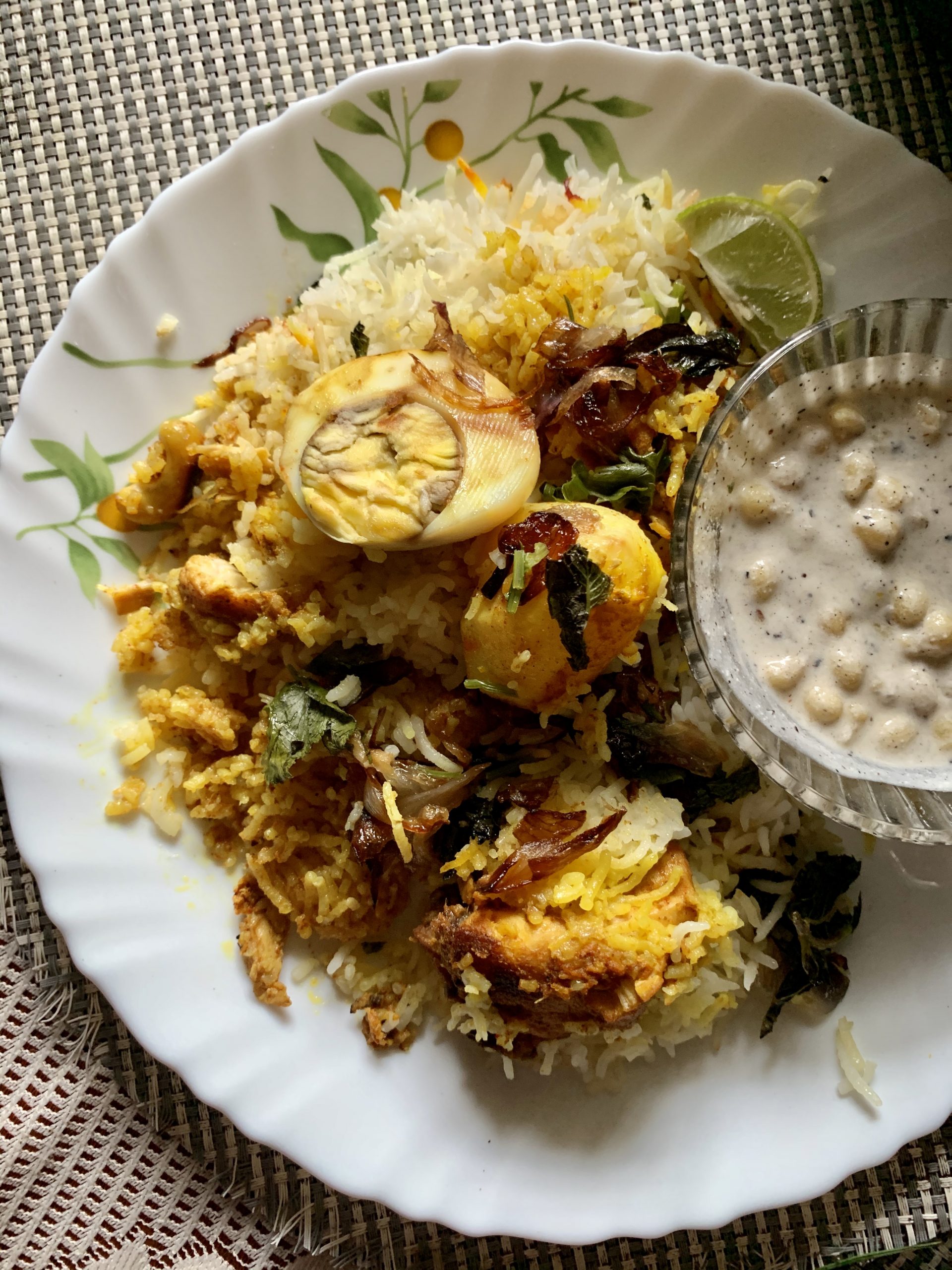 Biryani is happiness in a pot. It's the exceptional amalgamation of Indian Spices and stories served in a pot. A wondrous combination of Spices, Rice and Chicken that's colorful, spicy and drool-worthy!

Today I am bringing to you my all-time favorite Biryani Recipe. Biryani is one of the most popular Indian recipes, that I'm sure you must have heard and tasted if you are into Indian Food. Biryani is like the epitome of Indian food. It's the celebration of spices, colors and culture served to you in a pot.

I love to make Biryani at my home. My family loves it. Although it is a very time-consuming recipe, it's totally worth the effort. When I first tried this recipe, I thought - " oh! that's exotic, and I can never be able to perfect it. Since that day back in 2016, it's been countless times that I have made Biryani and I have perfected my recipe over the years. Biryani is a traditional Indian recipe.

Like every Indian recipe, Biryani has about a thousand recipes, alterations, and stores associated with it. Every cook must try this recipe at least once. It's pure fun and indulgence into the world of spices! 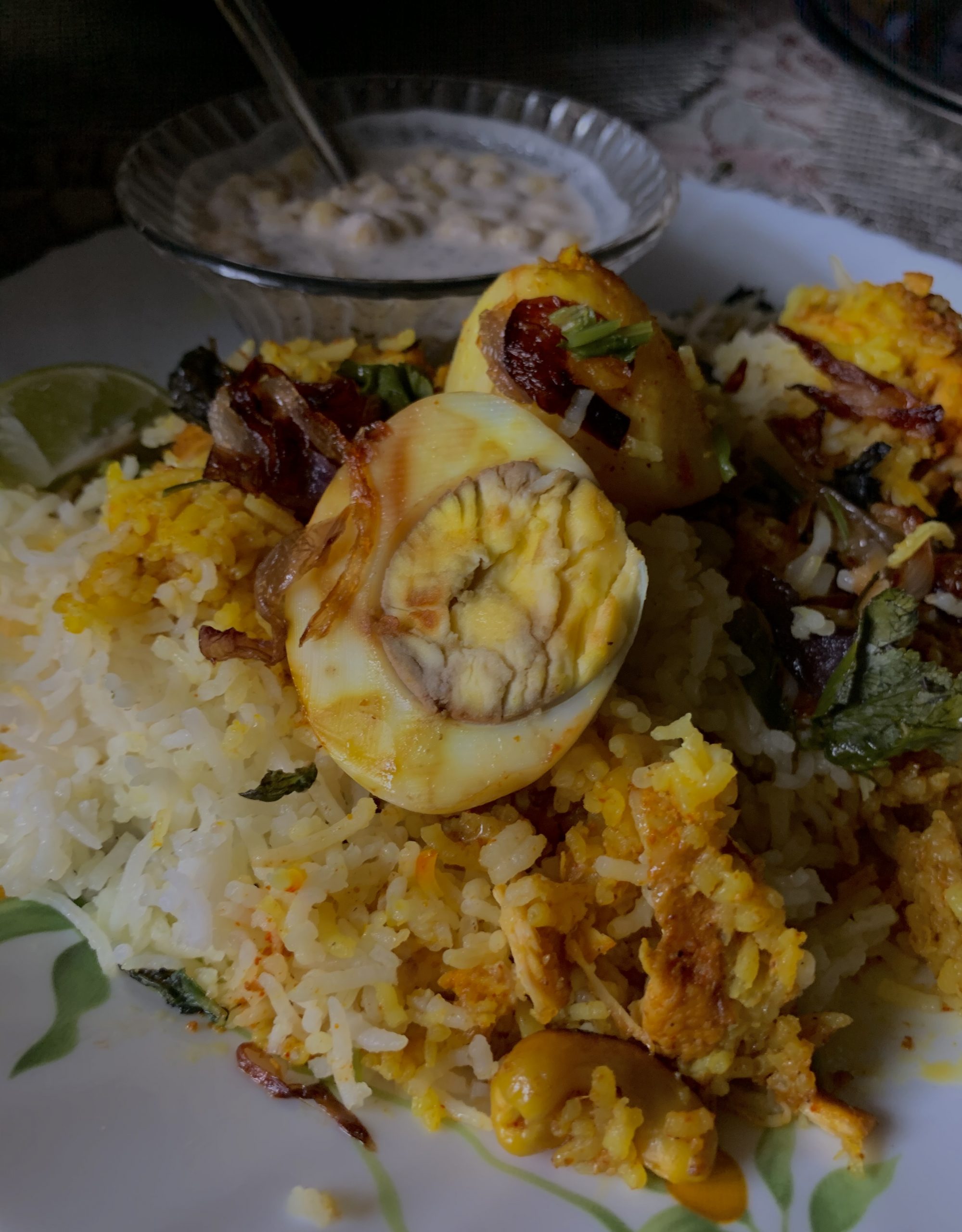 The Origin of Biryani

Biryani is a typical Indian recipe that comes from the Mughal era. There was a time when the Mughals ruled Northern Part of India and during their days of travel, they wanted to cook something that's royal and equally filling with the meat they hunt. So, that was the beginning of Biryani. This is the story I know of.

There are a thousand million stories about Biryani. Some believe it originated in Awadh, whereas some believe that Lucknow and Hyderabad are the epicenters of Biryani in India. I have tasted both these recipes.

Lucknowi Biryani is a little milder compared to Hyderabadi Biryani. Also, Hyderabad is in southeastern India, so there is an influence of South Indian cuisine in the recipe, which is all explained by the generous use of Curry Leaves which gives it a distinct taste.

Whereas Awadhi Biryani has a little less amount of spices and whole spices are just used for flavor and removed from the rice before you serve it. I love both these recipes.

However, I am more drawn towards the Hyderabadi Biryani because I just love spices in my dish. Also, Hyderabadi Biryani is different because in this the raw meat is cooked with the rice with the spices so it's a whole another concept of cooking and the rice has a wonderful flavor of Chicken broth because the Chicken gets cooked in it. Also, there is a delicious crust on the rice, that's to die for.

Biryani is basically the mixture of a lot of whole spices with rice and meat of your choice. These days many people who do not eat Meat, alter it with Paneer ( Cottage Cheese).  This is called Veg Biryani. It is cooked in the same way as normal Biryani, only the Meat is excluded and is replaced with Paneer and a lot of more veggies.

While in the Eastern Part of India such as in Bengal, Biryani is made with Potatoes and Eggs. The Eggs and Potatoes are boiled, had and fried with turmeric and salt. It is used for topping the Biryani. Also, Bengali Chicken Dum Biryani is a little sweet to taste.

If you go to the Indian city of Chennai, you can try Chettinad Biryani, which has a distinct flavor of Curry leaves and ghee which is just amazing. This is a really ancient recipe and it's quickly dying from the culture. 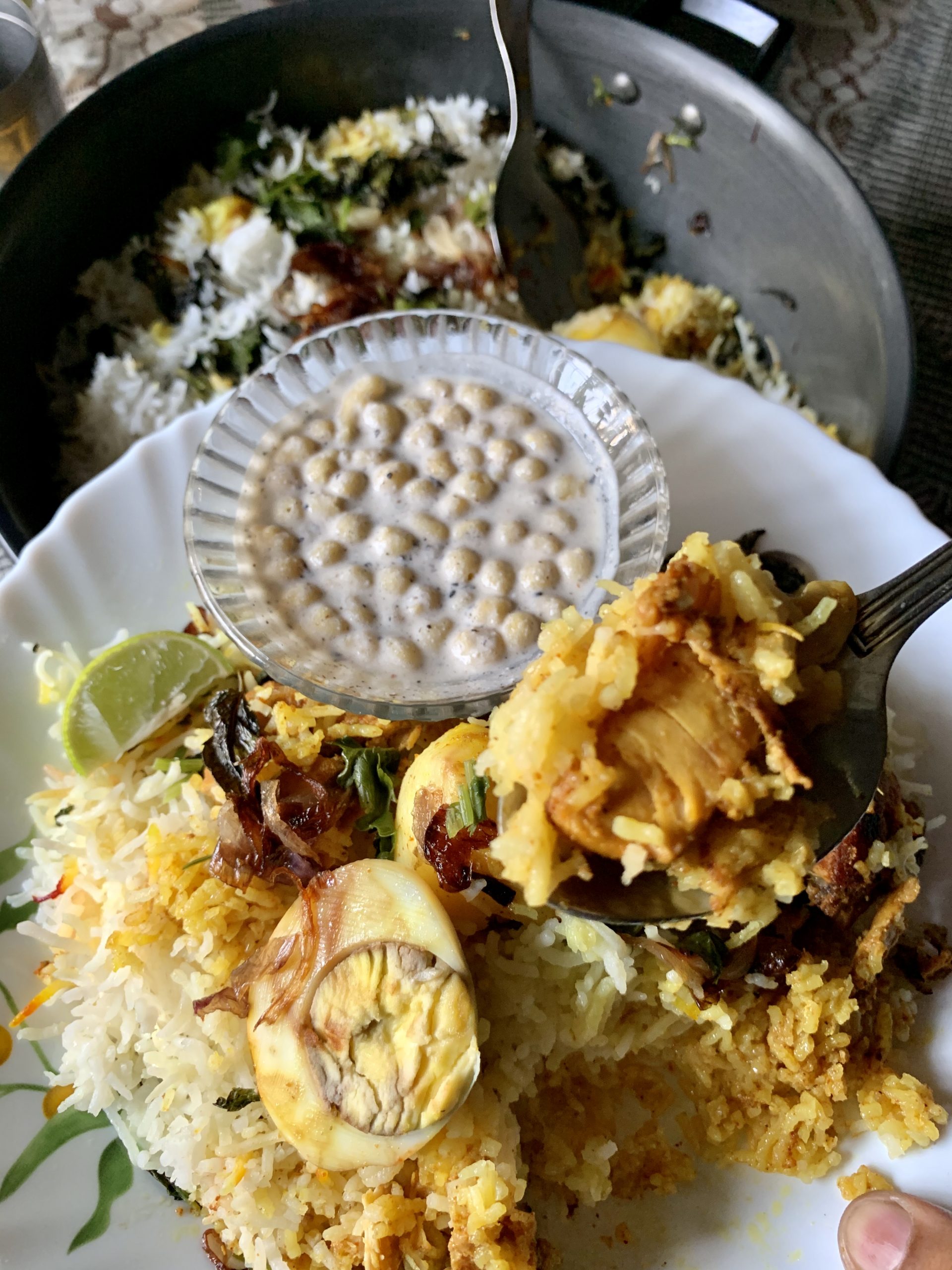 Biryani can be made with both Lamb and Chicken. While Lamb Biryani or Mutton Biryani has a unique flavor because of the meat, Chicken Biryani is quite lighter and is considerably easier to digest. However, both tastes divine and deserves a taste.

"Dum" is an Indian word for Steam. Typically during the holy month of Ramadan, even today in Indian cities like Lucknow or Hyderabad, Biryani is cooked like this. It's really rustic and gorgeous. When you steam the biryani, you stick the edges of the pot with a wet dough of flour. This will not allow the steam to escape from the Pot and will cook your biryani better. Also, it'll have the flavor of that deep-seated spice, that's just amazing.

Biryani is a very spicy dish. Indian Spices such as Cardamom, Black Pepper, Nutmeg, Bay Leaves, and Cloves have a distinct flavor in this dish. Also, it's these spices that make Biryani what it is. You should not try to exchange any ingredients in the Biryani recipe. It is what it is because of the flavors and spices. You can get all of these Spices in any Indian or Pakistani grocery store. They are quite easily available these days. Also, you get a spice mix called the - " Biryani Masala". You can even get one of those. This will make your work so much easier as you do not have to get the whole spices and make a spice mix at home. You could just use a spoonful of this to flavor your Biryani.

However, you'll still need some whole spices to flavor your Long grain Basmati rice. These are very easily available and I'm sure you'll fall in love with these Indian spices, once you get introduced to these amazing flavors. It's really one of its own kind.

Long Grain Basmati Rice that has been aged for over a year is an absolute must for making Biryani. You cannot use any other rice as this will release starch and make your rice soggy. You need long grain rice for that bright and vibrant look in your biryani.

Adding fried Eggs and Potato is totally optional in this recipe. I add those because I love them and I feel it makes the recipe feel more festive. That's exactly how it is made in Bengal.

Biryani is a spicy Indian rice recipe, cooked with Meat, Spices, and Veggies. It's filled with aromatic spices and a spoonful of Biryani tastes divine. There is the flavorful crust on the Chicken, which is crispy on the outside and juicy on the inside. It's a savory Indian recipe. 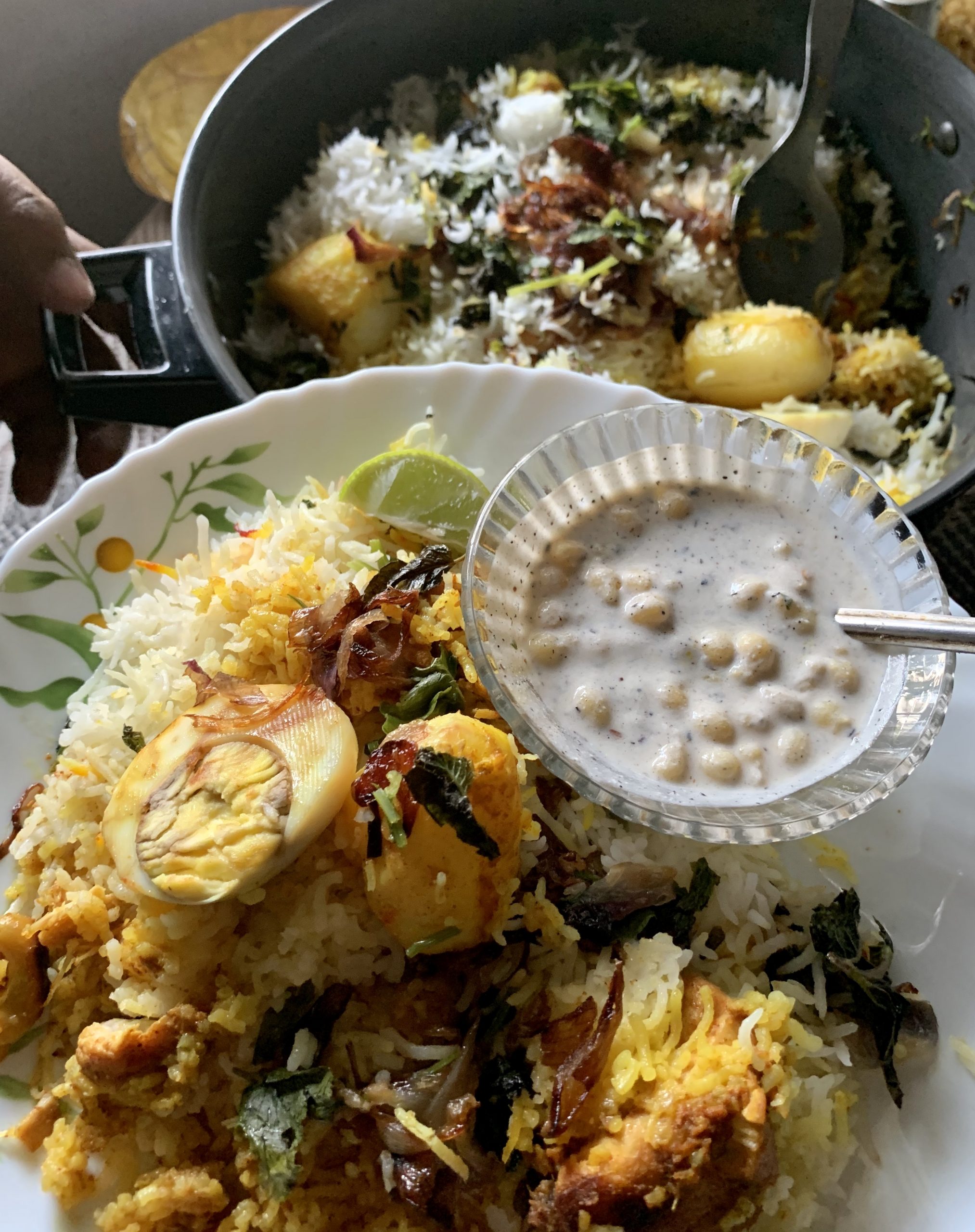 How to Make Chicken Biryani at home

To make the spice mix, use Yogurt and mix it with the Biryani spice mix, Tumeric, Paprika and Salt. Now, mix these with your Chicken and marinate well. Keep it aside for an hour. Marination of the Chicken is extremely important and this will flavor your Chicken Pieces and make it taste spicy and crusty on the outside and shall be juicy on the inside.

To make your Rice, first soak your Long grained rice for 15 minutes in water. After then, put water to boil and throw in whole spices such as Bay Leaves, Cardamoms, Cinnamon and Cloves it. As the water gets flavored and fragrant you can remove these whole spices if you will and then throw in your soaked and drained rice. Just par-boil it for 5 minutes over a low flame and you're done. You can add in a spoon of oil and a dash of salt in this as well. This will make your rice grains stand out even better.

Meanwhile cook your Chicken in a deep dish bowl. I use a deep dish pan for making Biryani. It typically serves six and is huge. This is perfect for making biryani. You can find the Biryani vessel in amazon easily. Or else you could just you a deep cooking pot and it'll work just fine.

I prefer cooking my chicken in the biryani pot itself. So, First I start with deep-frying my Onions. After I have deep-fried my Onions and removed them from the oil, I pour in the marinated chicken into the oil. I allow my Chicken to get cover cooked for at least 7-10 minutes. After 5 minutes keep stirring in between to check that it does not stick to the bottom. Because of Yogurt, Chicken tends to stick to the bottom of the pan. However, if you stir well, it won't.

After that garnish it with saffrons, Eggs, Potatoes, Fried Onions, Chopped Cilantro and Mint Leaves. Add a dollop of butter on it and cover cook it over high flame for 5-7 minutes. After that, lower the flame and cook it for another 2 minutes. Finally, your Biryani is ready.

What do you eat Biryani With? 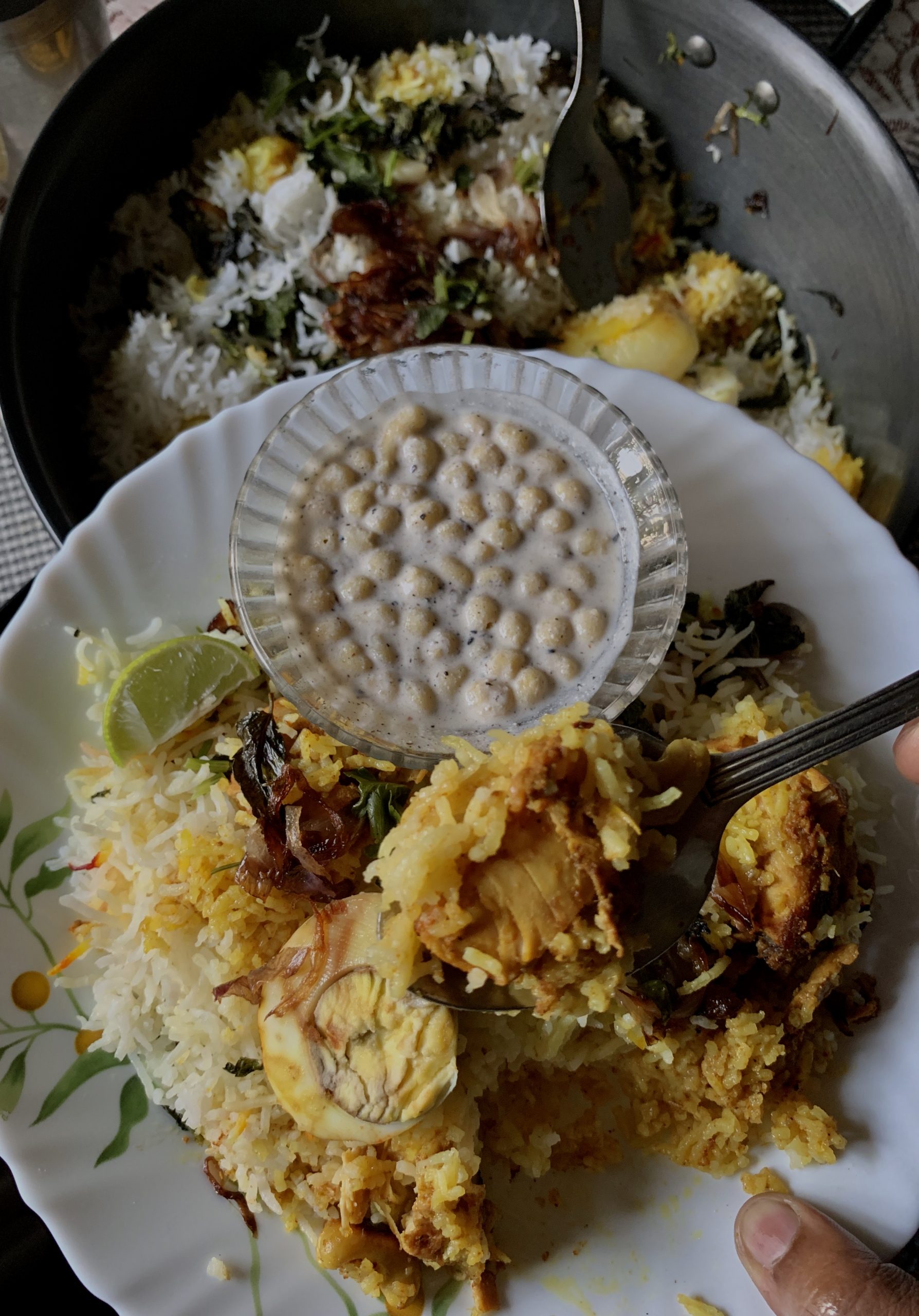 You can serve Biryani with raita and Salan. Raita is a savory Indian Yogurt Mix, which is served with Biryani. It is made by mixing Yogurt with Water, Black Salt, Dry roasted spices, Fried Chickpea Balls and some freshly chopped Onions and Coriander. It's really refreshing and gives a great feel of refreshment to your taste buds after you have a spoonful of the spicy Biryani. The Boondi Raita is really the best thing about having Biryani. This makes your dish even more special. Salan is a flavorful sauce or gravy which you can serve with Biryani.

For Marination of the Chicken

To Make the Rice

To Make the Raita or Yogurt Mix

Marination of the Chicken

Preparation of the Biryani - Garnish

To Cook the Chicken

To Make the Biryani

To Garnish the Biryani

The Final Cooking of the Biryani

To Prepare the Raita or Yogurt Mix

Nutrition Facts
Biryani
Amount Per Serving
Calories 390
* Percent Daily Values are based on a 2000 calorie diet.
Tried this recipe?Mention @recipemagik or tag @recipemagik