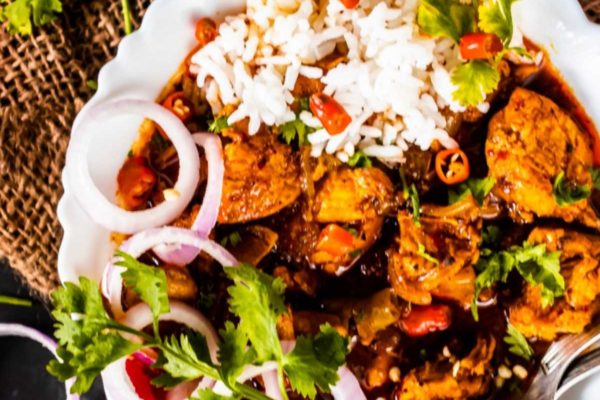 Vindaloo is a Portuguese-influenced Indian Curry Recipe that is sooo good. This is typically made in the South Western Coastal state of India - Goa and hence it's popularly known as Goan Vindaloo Curry. This has a reputation of being extremely spicy and still, it tastes sooo good. This makes for a perfect easy dinner recipe for weeknights.

You can serve Chicken Vindaloo with Fried Rice or Indian Coconut Rice or Soft Homemade Garlic Naan Bread along with a side salad.

Chicken Vindaloo is one of the easiest and most delicious Indian recipes for Dinner.

Just look at that gorgeous color of my Chicken Vindaloo curry. Isn't it looking soo appetizing! I just love this Chicken Vindaloo Curry. It's so close to my heart you guys! One of my favorites!

Have you tried my other favorite Indian Curries like

When I visited Goa for the very first time in 2010, I tasted this in a restaurant in Panaji and I was head over heels in love with this curry. I made it so many times at home and it was never close to the original recipe. And then I had the fortune of visiting Goa again in 2013 and I went to the same restaurant and literally wrote down the recipe from the chef. It was sooo kind of him to tell me the recipe.

He even invited me and my family to his home and we enjoyed a nice lunch of vindaloo curry and coconut rice! It was sooo tropical and everything we love about Goa, the coastal heaven in India...🏝

He told us that he had learned this recipe from a chef who had passed away long back and he's been making this Vindaloo curry for a long time. It was sooo amazing to learn a recipe from him, which traces its root to Portuguese influences who lived in Indian from 1497-1961.

Imagine this, sitting on a rustic long wooden dining table with a huge family and a big pot of Vindaloo Curry and Rice on the table. Incessant rains are on and you're talking about food history and enjoying this spicy hot curry along with steamed rice, Kismur,( a traditional salad made with pan-seared prawn and dessicated coconut) and a refreshing Sol Kadi (Kokum Coconut Milk Drink).

It's a memory I still have crystal clear in my head and I love to relive it every single time, I make this curry. I strongly believe that there is no memory like food memory and this memory of Vindaloo curry is so special to me..❤️

"Vindaloo" is a spicy Indian Curry, typically known as "Goan Vindaloo Curry". It was introduced to India by the Portuguese who lived in the coastal state of Goa. They called it “Carne de Vinha d’ Alhos“. This literally translated to Meat which is cooked in Wine and Garlic.

Over the years, this has modified with time, and today, it's called "Vindaloo". Because Goa is a tropical place, so the heavy use of spices is extremely common in Goan cuisine. Spices like Cinnamon, Chili, and Peppercorns grow in Goa and the neighboring state of Kerala and hence its heavy use in their cuisine is natural.

Typically, this was made with Pork. However, today, people make it with Chicken or beef or Lamb Shanks or even vegetables. Also, the wine is replaced with Vinegar. Other than that, the recipe remains the same. It's really an old recipe but it's still very much alive and super delicious.

How spicy is Vindaloo?

If you're a spicy food lover like me, you're going to love the fiery burst of taste in a Vindaloo curry. It's spicy, flavorful, and immensely satisfying.

Vindaloo sauce is spicy, flavorful with all the Indian spices like cumin, coriander, cinnamon, and cardamom, and of course it's tangy because of the vinegar and tamarind. The tanginess of Tamarind, Vinegar, and Tomato Paste, balances out the heat and this feels like a comforting and satisfying meal, especially when served with Steamed Rice or Coconut Rice.

What is Vindaloo sauce made of?

Is Vindaloo a Curry?

Yes. Vindaloo is a curry that is hugely popular in India and the UK.

FOR THE VINDALOO SPICE MIX

See the recipe card for quantities. Also, watch the video for a quick visual.

Remember to add enough water or Chicken Broth for the Chicken to get cooked or else the food will burn in the Instant pot and there will be no pressure build-up.

Coconut Milk - Replace Chicken Broth with Coconut milk for better flavors or after you've finished cooking the curry, just stir in some full-fat coconut cream. It'll add that hint of sweetness which is soooo good. 😋

Spices - If you cannot find whole spices like Cumin, Cardamom, Coriander, and Red Chilis, replace them with ground spices.

Also, you can add some coconut milk to the curry. See this Malabar Chicken Curry with Coconut Milk for reference.

You can store the Vindaloo Paste in a clean and dry air-tight container. You can refrigerate this for up to a month.

You can store this curry in the refrigerator in an air-tight box for 1-month. Reheat before serving in the oven. If the curry thickens add some hot water and then Microwave.

You can also freeze this Vindaloo curry for 1 month. Thaw overnight in the refrigerator and reheat in the oven before serving.