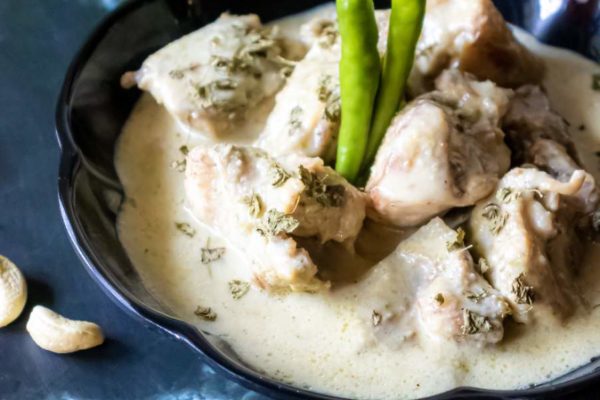 Chicken Korma - A delicious Indian Chicken Curry recipe with a nutty and yogurt-based gravy that gets ready in less than 30-minutes.

The Basic Ingredients for homemade Chicken Korma are Yogurt, Chicken, and Cashew Nuts.

This chicken curry recipe is also called Chicken Kurma in some places. And has a sweetish and nutty sort of texture. Keep in mind that this is different from Chicken Pasanda although they look similar.

The chicken Korma recipe is one of those recipes that you generally order from various restaurants. This is because this is an elegant chicken recipe. When I say, elegant, I mean, it belongs to the Mughal Era.

Chicken dinner is always my favorite dinner. But, shahi chicken korma is a recipe that fulfills my soul.

As you know we are adding cashew nut paste in the gravy so there is a slightly nutty texture in the gravy. Since we have not added turmeric in the gravy, so this has a white color.

Basically, Shahi Chicken Korma should always have a white-colored gravy. But, these days, I really don't know why people add turmeric and all other spices such as Red Chili Powder, and Cumin Powder while making Chicken Korma.

This is not how it should be. If you want to make Authentic Shahi Chicken Korma, then the color of the gravy should be absolutely white.

👩‍🍳 How to Make Chicken Korma

To Make Chicken Korma these are the steps that you should follow:

To make this delicious Chicken Curry, you need to follow these steps:

🍳 How to Make Chicken Korma Sauce

🇮🇳 Other Indian Recipes for dinner