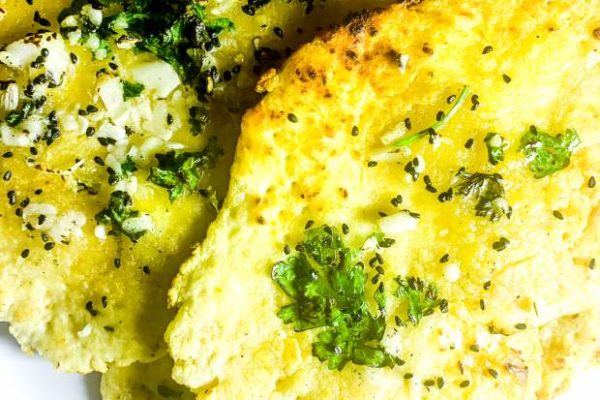 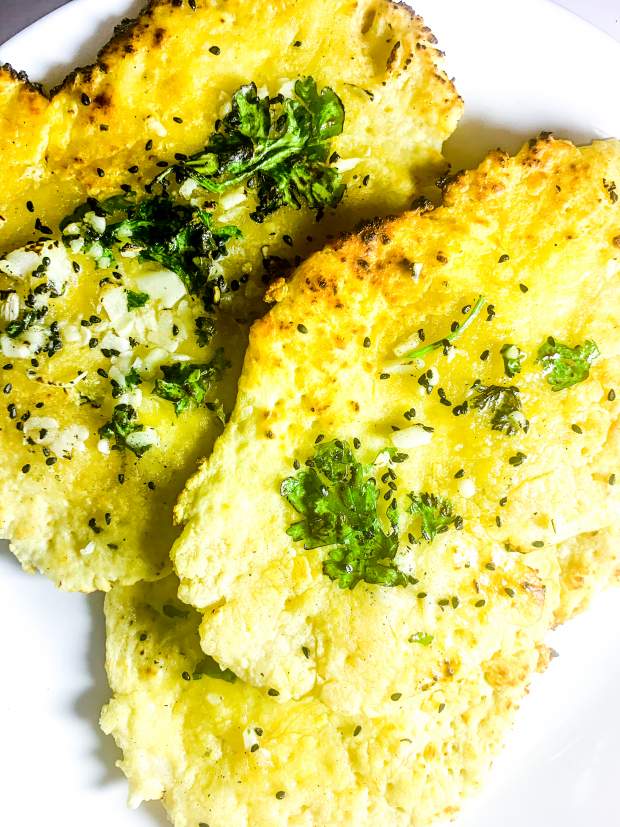 We all love that pillowy soft Garlic Butter Naan. Don't we? In fact, it is one of my favorite recipes. I am sure it must be your favorite recipe too. After all, that's the thing about this flatbread. It's so soft, tasty and amazing that sometimes it feels like you have just had the best thing in the world.

To make the best Garlic Butter Naan you need to get the dough right. We will make a pillowy soft dough that is not too dry and a bit sticky. Let me tell you that I have not used yeast to make these naans and yet they turned out excellent. As a replacement for Yeast, I have used Baking Powder, Baking Soda, and some Vinegar. You can also use some lime juice in case you do not have vinegar at home. 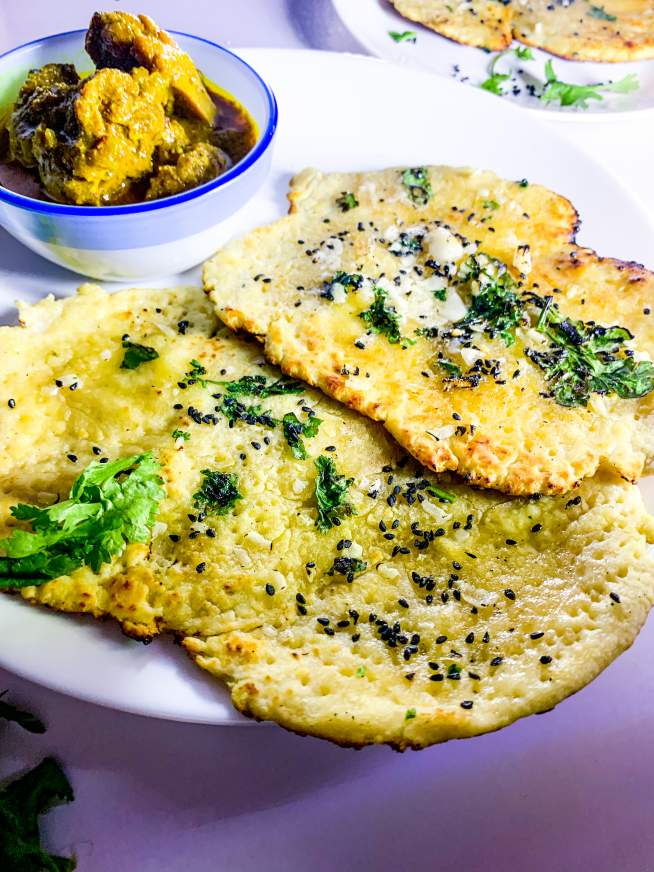 Once our dough is ready, we must give it some resting time. And my trick of resting it is by preheating the oven to 400F and then turning it off. Then I put the dough covered with a lid in the hot oven for about 60-90 minutes.

Garlic Butter Naan will always remain one of those recipes that can create a fountain of happiness the moment you start kneading your dough. It will always be special for all of us. 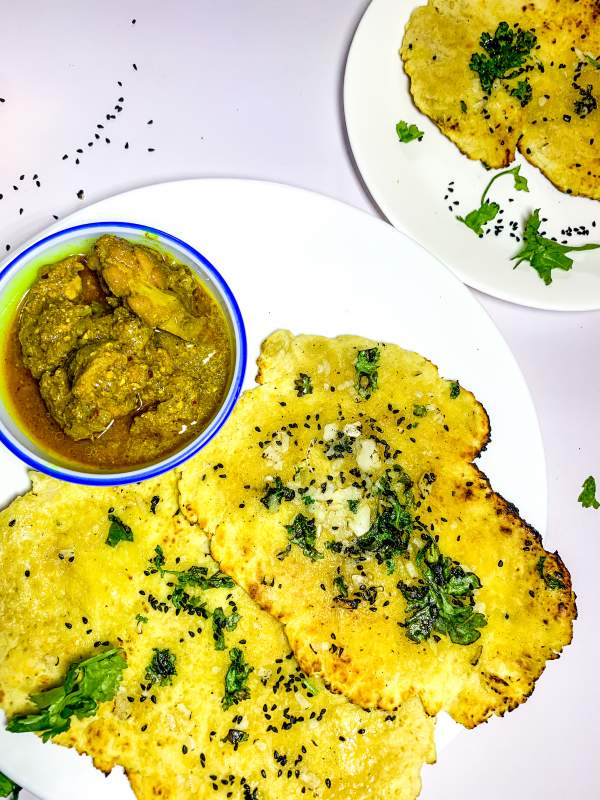 Making Garlic Butter Naan has never been easier than this. I used to think that this is a difficult recipe for which I would need a list of things and a lot of time. But I was so surprised that all it took was just 10-minutes of kneading, 60-minutes of resting and another 5-10 minutes of making. And, list of ingredients? Well, nothing much. Just some Flour, yogurt, vinegar, Baking Powder, Baking Soda, salt, and of course – the star of the show – some garlic, butter, and some cilantro. That is it! Making Garlic Butter Naan is just a piece of cake.

Some Important Tips to Make the Best Garlic Butter Naan 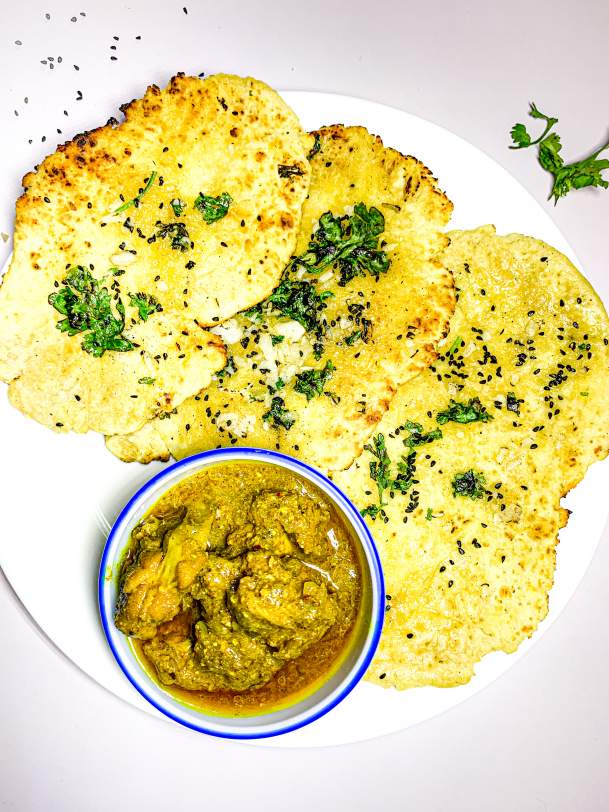 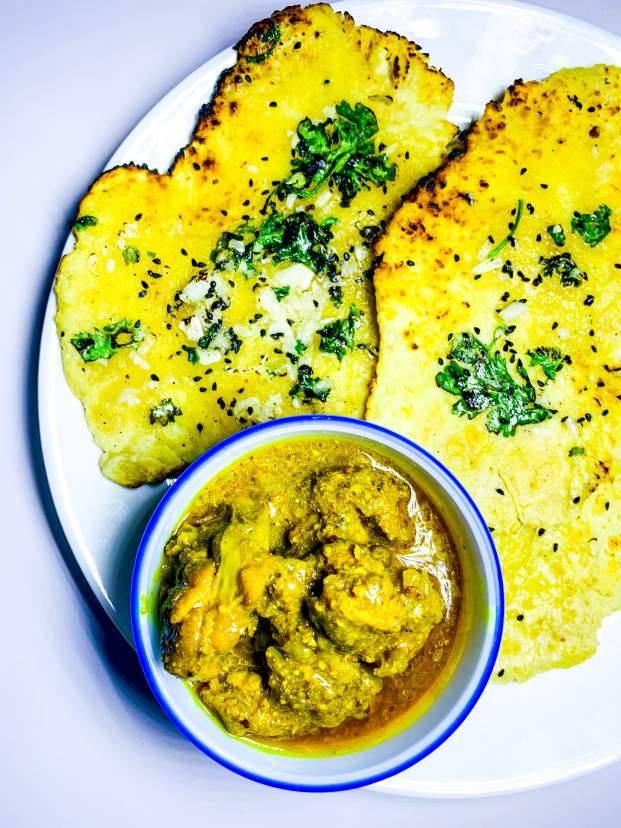 Quickly Check out the video for Homemade Garlic Butter Naan

Can we freeze our Garlic Butter Naan?

Yes, you can freeze your excess naan bread covered with a plastic wrap. It would be al-right for a day or two. But before eating you should keep it on the pan for a bit longer than you usually do. In case you are making it in the oven then you also need to keep it there for a bit longer.

How can we Make Naan bread in an oven?

What Kind of Flour Have I used?

What should be the texture of our Garlic Naan Dough? 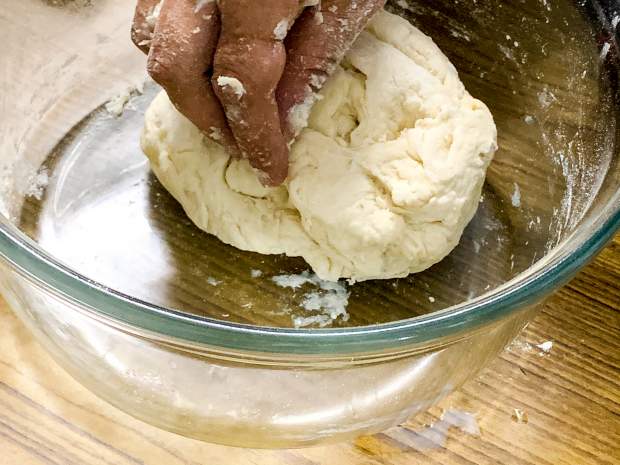 Why is it important to apply water on the Opposite Side? 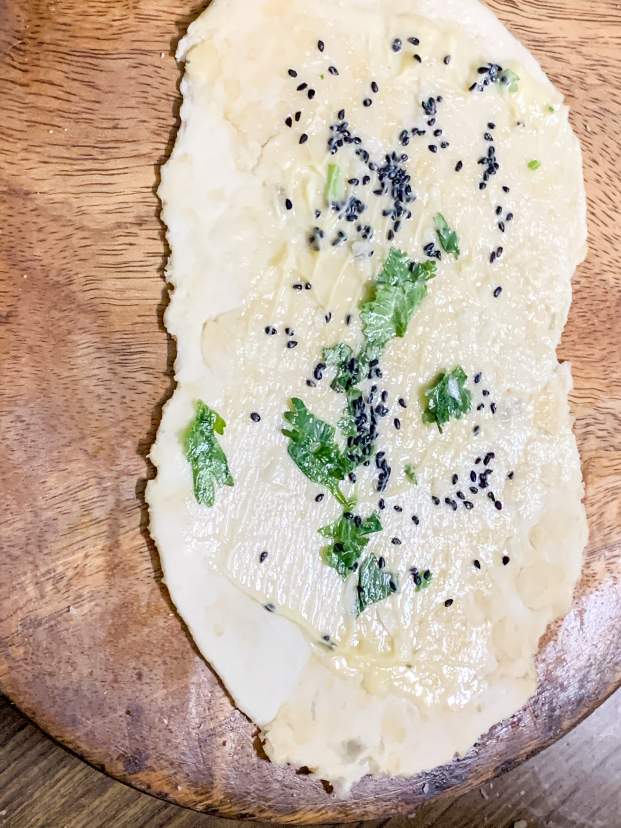 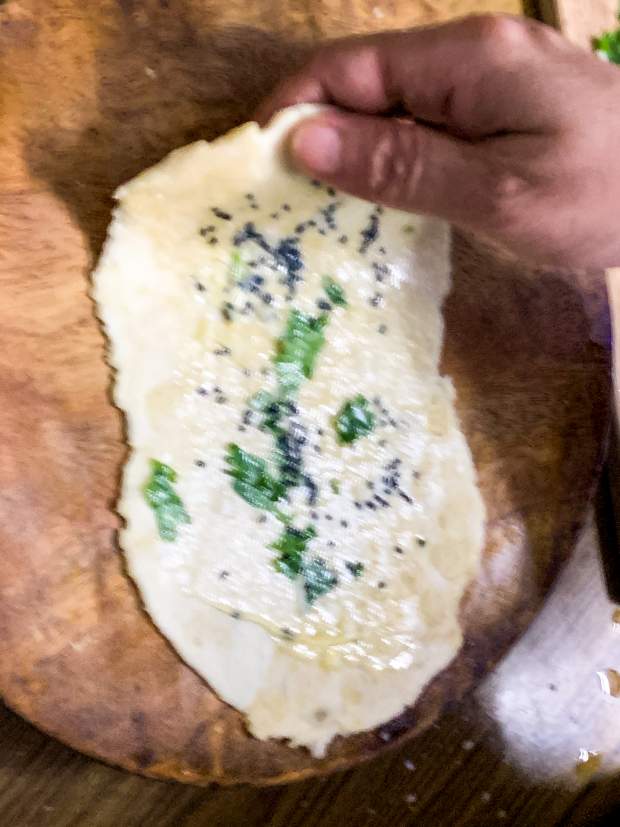 We should always flip over the Naan and apply some water on the opposite side. The side with water goes directly into the pan. This will make sure that your Garlic Naan sticks to the pan. And will also make sure that it does not fall off the pan when you turn it over.

For how long should we torch the naan bread?

We should torch the naan bread until it is brown from the sides. If you are having trouble turning the pan upside-down then you should take it out with a tong and put it on the fire directly.

Why is resting time so important for making Naan Bread?

Resting time gives the dough the required time to rise. We have added our baking agents along with vinegar. It will need some time for the leavening. Therefore, resting time will make sure that your naan bread tastes fluffy and soft.

How to make Garlic Naan Bread in Cast Iron Skillet?

First place the Naan bread on the skillet. Keep the water side down.

Use a fork to poke holes in your Naan bread, this will make sure there are bubbles in it. 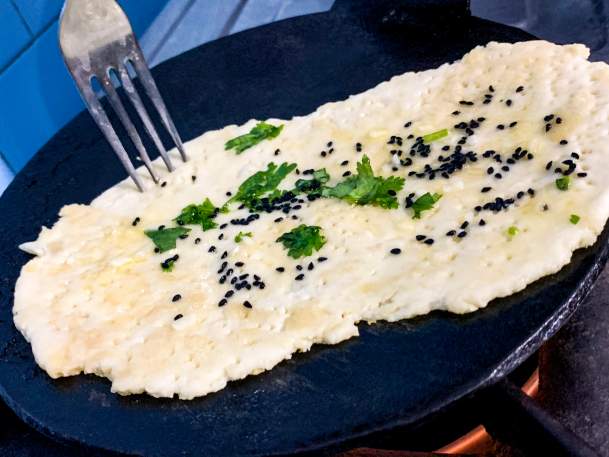 Now, flip the Pan and cook the opposite side. Don't worry, it won't fall down as the water will allow it to get stuck to the pan. 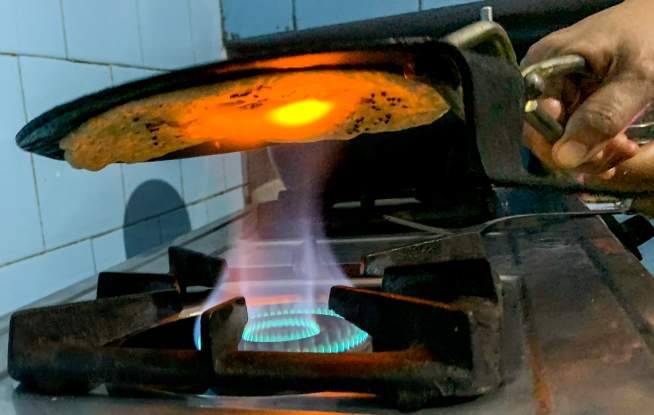 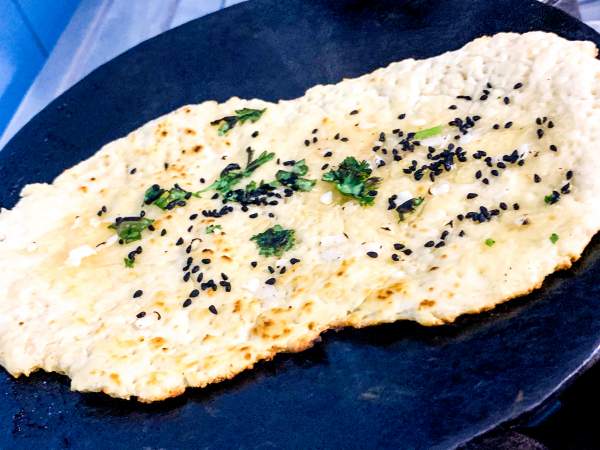 In case our bread is breaking from the middle while rolling, what should we do?

If you see that your bread is breaking from the middle while you are rolling it then it means that your dough is too dry. You should simply add some more lukewarm water or some lukewarm milk to get it soft. Also, if you do not rest it enough then it will break apart while rolling. 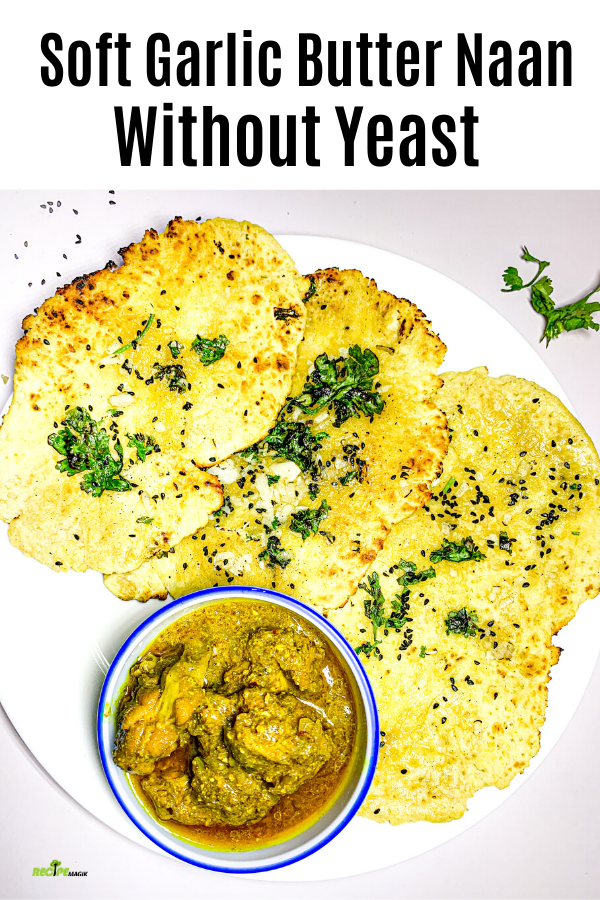 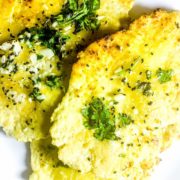 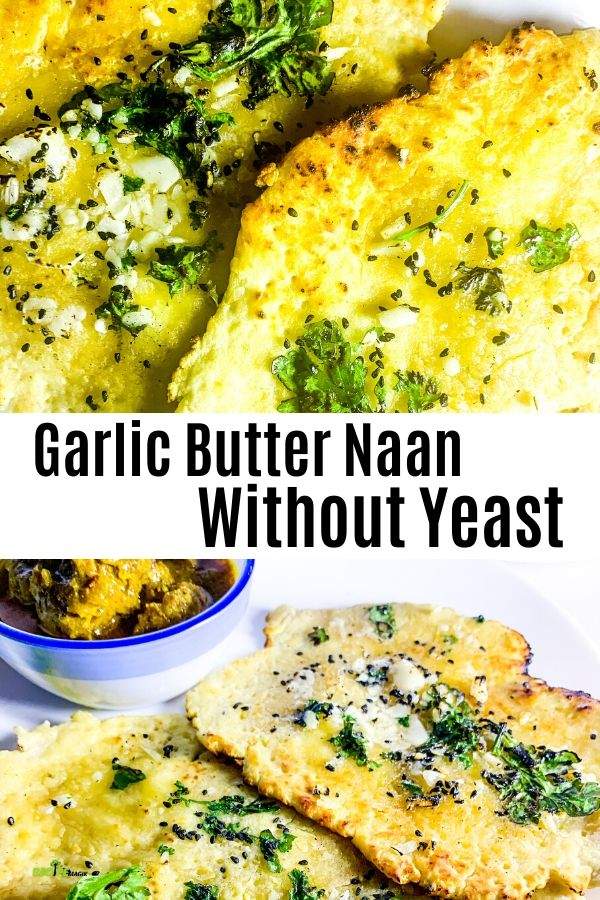