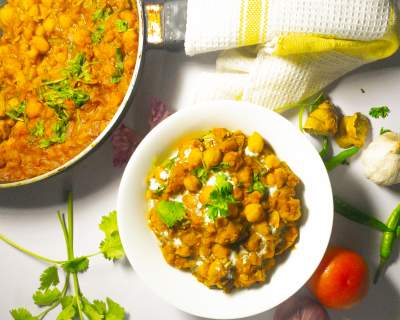 Are you bored of having the same Chicken dinner recipe every night? Then you should try this delicious Chickpea Tikka Masala recipe.

It's just like Chicken Tikka Masala only it's so much easier to cook and is so tasty.

Chickpeas are one of the staple ingredients in my pantry and I make it a point to include one of Chickpea's recipes in my weekly dinner rotations. It's easy to cook and kids love it.

Do you have kids at home, who are not a fan of Chickpea? I would still recommend you to make this recipe. They'll love Chickpeas after they've tried this fabulous version of the recipe. And I'm so sure about it!

Chickpea Tikka Masala is actually a product of experimentation. I was looking to make something for dinner which I can make in my Instant pot and is ready in almost 15 minutes. So, I decided to make this recipe. Try my other instant pot recipes for dinner.

I generally keep my Pantry stocked up with Indian spices as it comes handy in flavoring any recipe.

I love spicy food and so I love to collect them and store them always. Some Indian spices like Turmeric or Paprika or Cumin or Coriander or Garam Masala Powder are so common in my spice rack.

I particularly love Garam Masala which is actually a combination of Indian spices like Cloves, Cardamoms, Cinnamon, Nutmeg, and Star Anise. Of course, I love Cinnamon so I always keep it in my pantry. Learn how to make homemade Garam Masala here. I have used Ground Spices here. if you're to using whole spices, I suggest you dry roast them in a pan first until aromatic and then ground them.

Use the following qunatity of ingredients:

So just combine all of these spices and DIY Homemade Garam Masala. Store it in your Pantry or Spice Rack and use in your favorite Indian Curries.

How to make Chickpea Tikka Masala in an Instant pot?

Make a Yogurt and Cornflour mix with Yogurt, Cornflour, 1 teaspoon Cayenne, 1 teaspoon Garam Masala Powder. Add Salt and Pepper as per your taste and stir well into a smooth mix. Replace Yogurt with Coconut Cream for vegan version.

Marinate Chickpeas with your Yogurt and Cornflour mix that you've just prepared.

Sear the Chickpeas in the grill pan with some canola oil. Allow them to get charred properly and keep them aside.

Next, get it out and heat the olive oil in saute mode in the Instant Pot. You can use olive oil or vegetable oil.

To the oil throw in the minced garlic, and shredded ginger.

As the raw flavors of Ginger and Garlic are gone add in some chopped Red onions.

As the onions turn translucent, add a spoon of sugar and stir well. To this also add Salt, Turmeric Powder, and freshly ground black pepper.

Now add the chopped tomatoes and cook them well until they turn mushy. Add some Vegetable Broth and cook it until it gets mushy.

Finally, add the seared Chickpeas to the cooking tomato mixture in the Instant pot and saute for a minute.

Finally, add a cup of Coconut Milk and some garam masala powder.

Mix everything well and cook until you get a boil.

Once it starts to boil add a pinch of ground cinnamon & ground nutmeg and mix well. Top with some freshly chopped Cilantro. Your Chickpea Tikka Masala is ready.

Some important tips for that "MAGIKAL TOUCH" in Chickpea Tikka Masala

Many people ask me about curry powder. I recommend not to use Curry Powder as it's just a combination of cumin and coriander which does not replace the Indian Garam Masala. This tastes very mild and will change the flavor of your curry. So, for this recipe, you will have to use garam masala.

In this Chickpea Tikka Masala recipe, you'll need only Garam Masala and Turmeric Powder. Garam Masala can be found in the spices section or in Indian grocery stores or online.

You can use other spices if you want to but according to me, it's totally unnecessary. Spices are good as long as you use them in moderation. So, always follow a recipe or just go low on spices as the less they are, the more balanced flavors.

Indian cuisines taste great only when the spices are balanced and you get a hint of all the spices in your food.

You do not want to overpower with a lot of Tomatoes or Heavy Cream or Nutmeg or Cinnamon as it's commonly seen here.

I love the Tikka Masala recipe. I have learned it from my Mom and she makes the best. Most people I have seen use a whole lot of tomatoes with an equal amount of heavy cream. While what they do will bring it closer to the recipe but is so not the original way to cook tikka masala. In fact, Indian cuisines hardly use heavy cream.  I hate it when people use heavy cream to make an Indian curry milder or sweeter. There are other and better ways to do it, but don't bring that flavor with heavy cream. It just ruins the authenticity of Indian cuisines.

Tomato ketchup is so spicy and salty and has a strong flavor. Tomatoes, on the other hand, will bring the desired sourness to the curry and also thicken the curry. It takes time to cook the tomatoes but that's exactly how it should be done.

I have seen many times people replace tomatoes with tomato ketchup in butter chicken or any other Indian recipes as well. Please don't do that. That's not how it should be done.

Also, if you do not have garam masala powder, I strongly recommend you get it. It'll be a savior for you in cooking Indian recipes.

Nevertheless, if you find that this recipe still lacks that Indian touch, top with just a pinch of ground cinnamon and ground nutmeg. That'll do the magic!

So, that's how you can make Chickpea Tikka Masala at home. It's a really easy recipe and can be made by anyone. 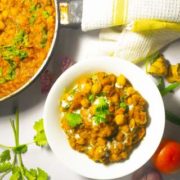