×
You are here: Home / Christmas / 100+ BEST Elf on the Shelf Ideas that will make you blush

Looking for some of the Best Elf on the Shelf ideas for kids? Well, here we have compiled the best ideas that will make you want to get started with your Elf on the shelf decoration right away.

But, many people are wondering What does Elf stand for?

So, as Wikipedia points out - Elf is basically a "supernatural human being", well, to me it's just a "Naughty little kid".

If you are thinking what is the meaning of Elf on the Shelf? Then this is it. Elf on the shelf started as a concept to help kids behave themselves. By now this has turned into a tradition. A tradition that is followed by everyone. And we love to do that for our little ones! It's plain fun, right!

SO, if you are a new parent, you might want to bring home these cute little Elves from the "North Pole" and they will help you keep your child's behavior in check so that Santa rewards them on Christmas Eve 🙂

It's a very fun concept. As the story goes - Santa sends these Elves on December 1st, as his little helpers from the North Pole so that he keeps a track of every kid's behavior. They go back each night and report kids' behavior to Santa. They tell him of the kid who was naughty or well behaved 🙂

But, there is a catch. Kids aren't supposed to touch the Elf or else the Elf will lose their magic. Another rule is that Elves don't move nor do they speak when the kids are awake. They will do naughty things when the kids are asleep. Every night the Elf takes a new position and this continues until Christmas eve.

Sounds so much fun right! I used to do these for my boys and they loved it so much! Hope you too do some of these for your tiny tots and have a great time with them 🙂

To do these you would need Elf stuffed toys. You can find Elf dolls online. You can also find Elf toys from the Dollar Tree and DIY it with other bunch of homemade crafts and stuff and messages and decorate for your little ones.

BEST Elf on the Shelf Ideas of all times

Elf playing with Flour on the Kitchen Floor

Elf is Feeding Marshmallows to the Toy Dinosaurs

Elf is looking at a cookbook and checking out new recipes

Elf is feeding Shark on the Sink

Elf has disguised himself into a snowman with TP Roll

New Elf in the house

Elf hanging on the Christmas Tree

Elf has made a mess of toilet paper roll

ELf has made a mess of Christmas Sprinklers

Elf stuck in the freezer

Elf is sick and is suffering from Flu

Elves are crushing all the candies

Elf is about to roast the reindeer

Indiana Jones the Elf meets the Dinosaurs in Lost World

Elf wrapped in a taco shell

Elf on the flush

Elf has borrowed your toothbrush

Elf has built a snowman with his friends

Finally, the Elf has arrived

Elf has hidden something in the yarn

Elf sitting on the toilet seat

Elf reminding kids that Santa is watching over them

Elf has made a mess of Gingerbread House 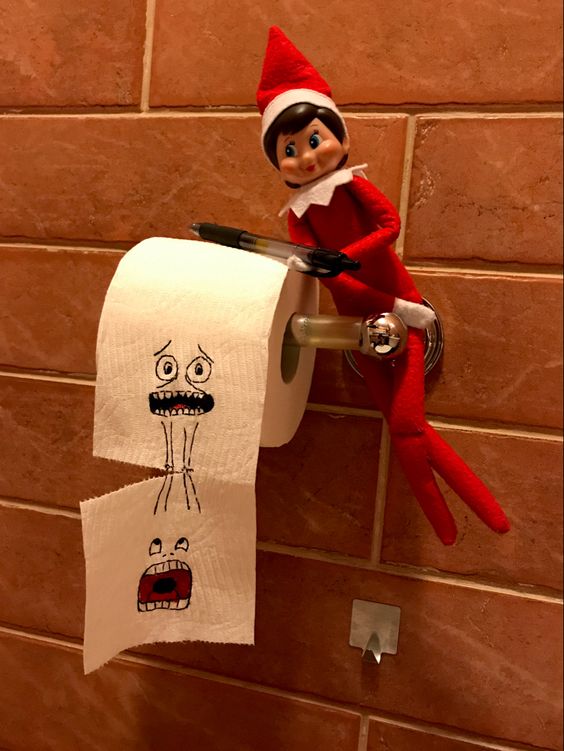 Elf is stuck in an Underwear

ELf making a snowman out of Toilet Paper Rolls

Elves have got Candies for you

Elf is camping in the freezer

Elf has made a mess of Band-aids

Elf is grabbing strawberry shake out of the fridge

Elf hiding in the Fridge

Elf taking a nap in the tissue box

Elf secretly gobbling up waffles in the fridge

Elf on the Shelf is in love with Whipped Cream

Elf rolling down the staircase wrapped in TP Roll

Elf stuck in a Starbucks Cup

Elf playing with aquatic toys in the sink

Elf climbing up the Window

Elf playing How many Licks

Elf is punishing the Grinch

Elf taking up all the cookies up for a Sale

Elves made a gingerbread house

Elves are securing parents from Grinch

Elf stuck in the Grinch Tree

Elf on the Shelf Shenanigans

Elf brought a Hat for you

Elf has got gifts for you

Elf stuck in a toast

Elf in the Fridge

Elves romancing and dancing with each other

Elves ready for a photoshoot

Elf Swinging in the room on your Toy Plane

Elf has had a Positive Pregnancy Test

Elf making a garland out of Marshmallows

Elf has got chocolates from Santa

Elf being a Turkey and Stuck in Christmas Tree

Elf in his Ball Pit

Elf has hidden the candy canes

Elf is hiding from the Smell of Dad's Fart

I hope you have a great time putting these elves in various places around your home. Thank you so much for checking out these ideas.