Is it too early for Christmas, 'coz I have got some Hilarious and Funny Elf on the Shelf Ideas for you?

The Christmas season might be far away from us. But, we cannot seem to get over our love for Christmas. Talking about Christmas, the first thing that comes to our mind is the Elves.

So, here I have got you covered with some of the best Funny Elf on the Shelf ideas. These elves are packed with happiness. They are literally so funny that you would love them a lot.

Whether you are a busy parent who is trying to get ideas for Elf on the Shelf, or you just need some inspiration to arrange the Elves these ideas are just perfect for you.

Honestly, my reason for looking at Elves is nothing but pure happiness. I get so much fun looking at these cute little red and white creatures carrying around messages from Santa.

I know the Holiday season might be far, but, when it comes to Elves, I am always super excited. So, with no further ado, let's See out some of the best Elf on the Shelf ideas.

Funny Elf on the Shelf Ideas

If you are thinking of making elves for teen girls, then this idea is absolutely genius. Make the elf play with her makeup.

Elf Being a Doctor

Do you know how cute and elf doctor would look? Well, you can see one in the image below. This cute little doctor will make your day so much better.

Elf is enjoying mandarin orange juice while everyone is away. Finally, an excellent way to keep himself warm by the toaster and sip in some orange juice.

Elf needs an energy boost. And, was looking for tea. He found these tea bags and made a mess of them. How cute? 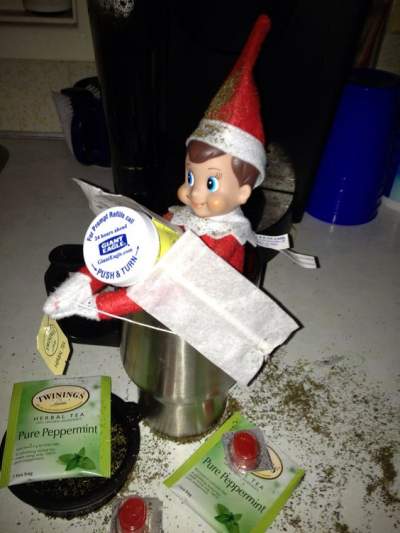 The elf couldn't do floss

Poor elf tried to do floss. But, he failed. He basically tied himself down with the floss. That's cute and funny.

Poor Elf rolling down the Staircase stuck in a TP Roll

Poor little elf tried to reach you but was busy noodling around with the TP roll and he rolled down the staircase in the TP Roll.

Elf is happy to be back. And has greetings from Santa in the form of M&M.

Elf asks kids to brush their teeth in a creative way

Elf is happy to wish you good morning. And doesn't want you to have a bad oral hygenie. So, he asks you to brush your teeth regularly.

Elf being attacked by Shark

Poor elf is being attacked by a deadly shark on the sink.

Poor Elf Stuck in the blinds

Poor little elf was trying to reach you but unfortunately he finds himself stuck in a blind.

Elf has given your dad a new nail art

Elf has given your dad a New nail Art. He is gonna be totally surprised.

Elf trying to reach the box of candies

Elf is being naughty. He has a sweet tooth and he is trying to reach the box of candies while everyone is sleeping.

Poor Elf Stuck in a Shoe

Poor elf was sneaking around and has got stuck in a pair of shoe that was just lying around.

Elf is happy with you. And, he is roasting some Marshmallows for you.

Elf being Santa for a Change

Elf is tired of being a messanger for Santa. He becomes Santa for a Change.

Elf is scared coz dad Farted

Elf is scared because Dad has farted. He is hiding in a glass to save himself. How funny?

Elf is very angry with the Grinch. He sticks him to a door and punishes him for being naughty.

Elf being a cat

Cute elf is trying to pull up a cat look.

Poor little elf has pea'd. And has made a mess of your fresh green peas.

Elf stuck on the wall

ELf was trying to fidget with the wires of Christmas lighting and has got electrocuted. Now he is stuck to the wall.

Elf has sneakily taken a Sleeping Selfie with You

While you were sleeping, elf has taken a sneaky Selfie with you.

Elves sliding down and playing on the kitchen sink.

One of the easiest way to hide your elf is to push him in a TP Roll. You could get creative and add some cute captions as well.

Another funny way to hide your elf is to keep him in your fridge. Wrap him in a blanket and disguise him completely.

Elves fighting with each other for a sip of the Magical Christmas syrup.

Elf hiding behind the sofa

Hide your elf behind a sofa and let her be the christmas magic that leaves people startled.

Elf cares for his teeth because he has a sweet tooth

This cute elf is stuck on the wash basin. He is sitting with a toothbrush and a toothpaste.

OMG! The elf is munching on your chocolates while the kids are busy.

Elf reminding us of Real Christmas

These cute elves from North Pole are back to tell us about the real meaning and significance of christmas.

Finally, you have the queen elf in your home who is busy being glamorous.

Elf is taking a sip of cold beer and eating popcorn while relaxing on the sofa.

Elf trying to get his tan

Elf is angry and is on a Strike

Poor Elf trying to Work Out

Elf hiding in a bottle

Elf is hungry for Pancakes

Elf Made Lunch for all

Elf carrying a Note for You

Elf is angry coz the kids were being naughty

Elf has hidden Candy Cane and Wants you to find them

Elf hiding in a Glass so you can carry him around

Elf has applied band-aid all over himself

Elf has got Sno Balls from the North Pole

Elf is Upset with your Behavior

Elf is upset coz the milk has gone bad

Elf is hanging around by the sink

Elf climbing up the cupboard to grab candies

Elf is distorting your photo

Gingerbread Elf scaring away other elves

Elf has made snowman Donuts - Image Source: Building Your Story

Elf has made a smiley on the mandarin

Elf is again making a Mess

Elf making faces on the Eggs

Elf has got Donuts from the North Pole

Elves have some Surprises for you

Elf has got a Warning Note From Santa

Elf is Back with Treats

Elves are angry and they want to take away your toys

Elf is stuck in a glass while trying to make Eggnog

Elf is wearing a Cute Gown

Elf is being Naughty

Elf making Christmas Cookies on the back of the toilet

Elf has broken his leg

Elf is hungry and Naughty

Elf taking out her print outs

Elf has got an Invitation for You

Elf is making a mess of tissue papers

The Toys Have Tied down Elf

Elf being a Groom

ELF is trying to help his friend

Elf is in a Binging Mode

Elves couldnt play with Tape and have stuck themselves

Elf has done your Laundry coz you were good

Elves need you to do these things

Elves relaxing on the kitchen sink pretending its beach

Elf is happy and has got a Chalkboard Message for you

Elf is playing with your family photograph

Elves made a Christmas Tree of Hersheys Kisses

Elf is learning Ice Skating in the Freezer

So, these were some of the best Elf on the Shelf Ideas. I am sure you had lots of fun browsing through these funny elf on the shelf ideas. Leave a comment and share your reviews.