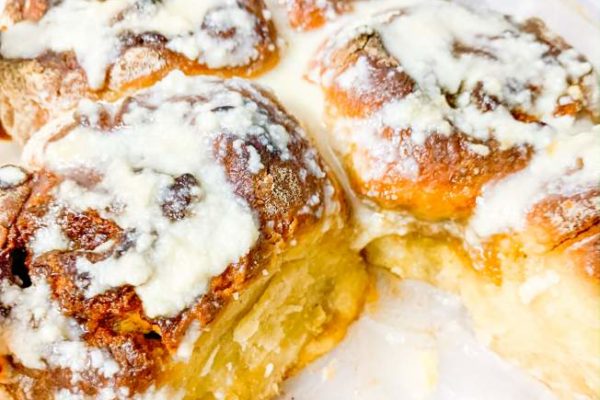 Creamy, moist, sweet, Cinnamon rolls crispy on the outside & soft, cakey, moist on the inside.

Packed with the sweetness, creaminess, and moisture of the banana these Banana Cinnamon Rolls are the best Banana Dessert ever.

The best part is these are made without yeast. You can make this recipe in under an hour⏲️ I promise, it'll be over before you know it and it's really very easy!

Equally happening and festive, whenever you make these flavorsome, cinnamony rolls make sure you prepare your taste buds early on. They are in fr a real treat here.

See the recipe card for quantities. Also, check out the video for a visual 🎥

Let me tell you from the beginning that I have not used Yeast for this recipe. However, traditionally people do use yeast. They add yeast to a mixture of melted butter and milk while they are lukewarm. Since I have not added yeast, it doesn't mean my cinnamon buns didn't rise. If you see, they actually did rise. And a LOT.

Stir well with a spoon and let the butter and sugar soak in that aromatic fragrance and that spicy taste of cinnamon into itself. This is the filling for our Banana Cinnamon Roll.

Now let's add another super-important ingredient of the day - Banana. To this add some thick yogurt so that it helps our dough rise and shine. And finally, something without which Baking is impossible - our sweet old friend - Vanilla Essence.

And, that's it. Let's mix them up. Use your hands and make a soft, moist dough. Then, you can place it in the fridge for some time to help it rise.

After some time, take it out and roll it like a flat rectangle. Now, take your Cinnamon Sugar filling that you had created earlier and smeared it all over the dough. Once it has been smeared it is time to roll it up from one side. Yes, my friend. This is the step that will make you your cinnamon roll.

While rolling if your dough is sticking on the surface. Use some flour. This flour will help you roll it easily.

Once you've rolled it into a thin long strip, use your kitchen knife to cut out at least 2-inch wide cinnamon roll, oh! wait, it's Banana Cinnamon Rolls.

Now place them on a baking tray lined with parchment paper and bake in a pre-heated oven at 350F or 180C for 30-35 minutes.

For the frosting, mix cream cheese, butter, and some icing sugar until light, fluffy and creamy. Keep it ready. If you still got some time, then go ahead and relax for a while. You've earned it.

Once your baking is done and your oven has beeped, let's smear that creamy cream cheese frosting all over our Banana Cinnamon roll buns. And, yes my friend. They are ready to be eaten.

Jump right away at them. You will love every bit of this crusty, creamy, Banana cinnamon rolls. 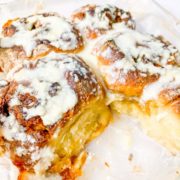