Vegan Black Bean Enchilada Soup - a recipe that is bound to send happy vibes in your home. The cold winter weather needs nothing more than a bowl of warm and comforting soup. right? And, the Enchilada Sauce makes it taste so good. Have you tried my White Bean Enchilada Soup?

Talking about Soup, I am taken back to my Roasted Carrot and Ginger Soup, my favorite Velvety Green Spinach Soup, the most popular soup of this blog - Red Bean Tex Mex Soup!

Coming back to this Vegan Black Bean Enchilada Soup. What a brilliant soup it is! The black beans along with veggies add that nutrition while the Enchilada sauce along with the spices brings a beautiful flavor to this comforting soup.

Ingredients You Need to Make this Soup:

Tips to make this Soup Effectively:

Other Soups you can Try:

Did you make this recipe? Please leave a rating below. 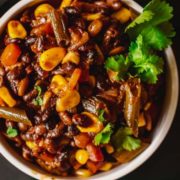