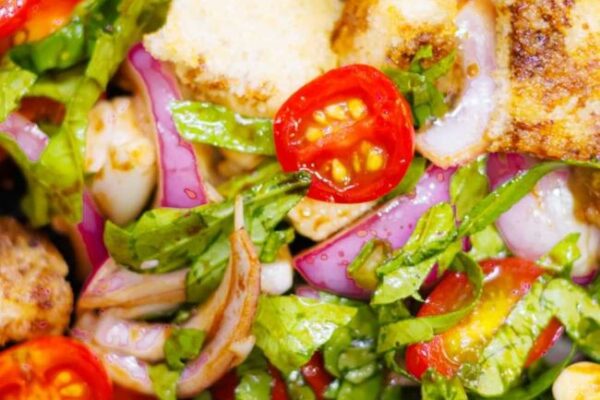 Panzanella Salad is a classic Tuscan Salad made with fresh Cherry Tomatoes and Bread. Stale Bread which are crisped up in the oven and served in this salad along with Mozzarella Cheese, juicy Summer Tomatoes, Red Onions, Fresh Basil leaves and a quick dressing dressing made with only 3-ingredients; Olive Oil, crushed Garlic and Red Wine Vinegar.

Its such a super simple and easy salad recipe, a great Summer BBQ Side! And a great way to enjoy fresh, ripe and juicy tomatoes in your meal.

Panzanella Salad is essentially a Mediterranean salad recipe which is made using Bread and Tomatoes.

However, typically this is indeed a bread and vegetable salad but in the initial days people used to make it with Bread, Tomatoes, and Mozzarella.

I love to stick to the classics because, of course, Bread and Tomato is a match made in heaven just like your classic Bruschetta

Besides Tomatoes and bread, there is Mozzarella Cheese, Fresh Basil and some Red Onions for the crush.

Also its one of those classics which is perfect for a Summer Lunch or Dinner best served beside BBQ Summer Recipes.

Bread is a very common ingredient in all Mediterranean recipes. Be it for salads or Pita Bread or Meatballs or served with Gazpacho or even dessert puddings. And like every other Mediterranean salad this one too traces its origin back to Tuscany.

The Origin of Panzanella Salad

As many people point out often times that this dish was born out of necessity. Peasants used stale bread along with fresh garden veggies to make this simple yet refreshing salad.

A simple day old saltless bread which is used in the form of a salad.

Now, you must be wondering why saltless bread? Well its because of the rivalry between Florence and Pisa in which Pisa had blocjed the supply of Salt.

As a result the bakers of Florence baked saltless bread. Also the prices or Salt infrared so people didn't use it as often. And today saltless bread has become a major part of Tuscan cooking and goes great with salty Salami or Ham.

Traditionally, its a simple day old bread which is soaked in water for about 15 min, then its cut up and tossed with fresh seasonal veggies.

Did you know that Tomatoes were only supplied to Florence after the 16th century so it was a later addition.

Tomatoes, Mozzarella Balls. and tossed with Extra Virgin Olive Oil and Red Wine Vinegar was later a popularized version of the traditional Panzanella which was just bread and veggies bowl.

Dry and Toast Bread before use

I like to use crusty Ciabatta bread for this recipe of Panzanella Salad. Traditionally Italian Country Side Bread is used to make authentic Panzanella Salad which is coarse and chewy.

Remember to refrigerate the bread overnight before use. Refrigerating bread for a night gets rid of its moisture and it becomes perfect to use be used as croutons.

Next, toss the bread with some really good extra virgin olive oil and salt. Toast it in the oven for 5-10 min or until the breads get crispy.

Wondering why this extra step?

Well, drying an toasting your Bread before tossing it with veggies to make Panzanella Salad will allow your bread to soak in all the delicious juices and flavors of the dressing!

So it will be even more delicious!!

I love to use juicy and fresh Cherry or Grape Tomatoes for this recipe. I slice them in half and then toss them with the crispy bread cubes.

Also these are cheap, easily available in abundance during summers and are so easy to use.

A pro tip would be to Salt the Tomatoes. Simply slice and salt your tomatoes for just 5-10 min.

This draws out the excess water from tomatoes and also gets them extra good and tasty.

And wait! the best part is the juices that drip from the salted tomatoes. Save it. It gets super flavorful when you add it to the vinaigrette.

Just like an authentic Panzanella Recipe, I use only leftover tomato juices, Extra Virgin Olive Oil, Red Wine Vinegar and Crushed Garlic for the dressing.

You might also use just a tablespoon of Dijon Mustard to the dressing. It intensifies the flavors ten times. You can also add some thyme to this.

How to make Classic Panzanella Salad

Dry and Toast the Bread

Combine all the ingredients

Let the salad sit for 30 min prior to serving. Doing this simple thing, will allow the crusty bread to soak in all the tasty juices of the dressing making this salad extra delicious and yumm!

REMEMBER To keep the bread separate from the chopped up veggies so that they remain crusty.

Toss the bread with the Veggies, add the Mozzarella Cheese and serve!

What goes well with Panzanella Salad

This super delicious and juicy Panzanella Salad is best served during Summers with BBQ Dishes or Grilling recipes.

Here are some great sides to serve Panzanella with

What is Panzanella made of?

What does Panzanella mean in Italian?

Why is it called Pazanella?

"Pane" means bread in Italian and "Zanella" means Soup Bowl. It typically is a soup bowl which keeps you refreshed and cool during the hot summers. 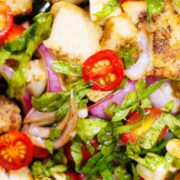