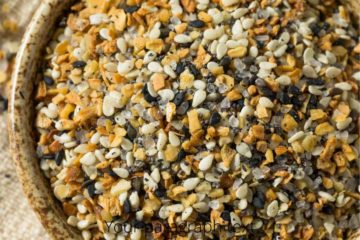 Here the BEST Everything Bagel Seasoning Recipe that you will ever need. And, there fore you won't have to Google Where can I buy bagel seasoning?

Who doesn't like fresh bagels in the morning? Even the grumpiest person would cheer up at the sight of a bagel! Pair your morning bagel with cream cheese and you can't ask for a better breakfast.

But do you want to know just what makes bagels so damn addictive to eat? It's not just the crunchy exterior and the fluffy and smooth interior that makes bagel such a treat to have.

The actual secret lies in the seasoning that's on the bagel. That's right, we are talking about the nutty and crispy seasoning that is on every bagel out there.

You know it, and you love it. But do you know how to make it?

🥯What is bagel seasoning?

Bagel seasoning is a staple of every bagel, and can be even used for other types of breads.

Most of us are already familiar with Trader Joe's everything bagel seasoning. It consists of ingredients like poppy seeds, sesame seeds and much more.

Just sprinkle this seasoning on your bagel and it'll make your bagel experience much better by tenfold!

We admit that Trader Joe's everything bagel seasoning is quite good. But it is not the real deal you get at a bakery which makes its bagel with their own homemade seasoning.

So why not try making your own bagel seasoning as well?

First of all it's not at all difficult to make it, and will hardly take you ten minutes of your day.

You'll also get to control what ingredients and how much of them goes into your bagel seasoning.

And finally, you can make a much healthier version of bagel seasoning that would be without any preservatives and additives that is found in the market variety.

With so many perks of making your own bagel seasoning, why would you want to buy the market stuff?

🧂What is everything bagel seasoning made of?

Most seasoning mixes require a myriad of ingredients to complete it. But not this bagel seasoning!

Not only is the list of ingredients extra small, but it is also super affordable and easy to get at your nearest grocery store.

Of course you can make your own variations in the ingredients to come up with your own bagel seasoning, but we are here to get you started on the basics.

So let's get to know what you'll need to make a traditional bagel seasoning!

These slightly nutty and earthy seeds from the poppy plant are the star of your bagel seasoning.

Although they are not as strong in flavors compared to the other ingredients on the list, they will make up for it with their crunchy texture. This makes poppy seeds versatile in function and you can use them in any kind of toppings.

White sesame seeds are the more common variety compared to their counterparts.

Although sesame is most commonly used in Asian cuisine, they also make for a perfect addition to any breads.

Who can forget those fluffy sesame burger buns? So it's no wonder that sesame seeds have found their place in the Bagel seasoning as well!

You don't see black sesame being used a lot in western cooking, which is such a shame as they are even better in their flavor compared to the mild tasting white sesame seeds.

And this is exactly why we need to put black sesame seeds in the Bagel seasoning. Not only will they take the flavors up by a notch, but they'll also add to the color department of the seasoning

If you are unfamiliar with dried minced garlic, then don't worry because they are pretty easily available in the grocery store.

This ingredient is basically minced garlic but in dried form. You get the dried product by placing the fresh minced garlic in a dehydrator to remove all the moisture.

This allows you to use it in the seasoning mixes as it doesn't have any moisture content that can spoil the seasoning. If you like garlic, then you cannot skip out on this ingredient!

If dried onion flakes are not available in your nearby grocery store then you can use onion powder as a replacement. But we really suggest you try to get dried onion flakes as not only will you get the taste of onions that way but you'll also add to the crunch of texture of your bagel seasoning.

If you want the best results out of your bagel seasoning then go for flak-y sea salt. Although it will be a bit more expensive than your regular table salt, the taste and it's unique rustic texture will make up for it. You'll love it when those salty flakey bits burst in your mouth in a flavor explosion!

❓How to make Bagel Seasoning?

For making bagel seasoning you'll not need any special equipment like mortar and pestle or your food processor.

All you need is your ingredients, an appropriate sized bowl and a spoon for mixing!

📦How to store Bagel Seasoning?

Bagel seasoning can be stored like any other seasoning. Just pack it in an air-tight glass jar and store it in a dry and cool place.

The goal here is to keep it away from any excessive heat or moisture as these factors can spoil the bagel seasoning.

Store your bagel seasoning the right way and you can expect it to last up to two months easily. Just keep it airtight, cool and dry!

🥔What can I put everything Bagel seasoning on?

Most people think that bagel seasoning can be used only for bagels, so it's not worth making it at home. But the truth is that you can use bagel seasoning on a variety of other foods, which will make it totally worth it to make your own bagel seasoning!

We'll list out a few dishes on which you can use your bagel seasoning. But don't forget to experiment and find out what more use you can get out of your homemade seasoning!

Bagel seasoning is underrated in the world of seasonings, but we hope we've changed that for you with this guide! Now you know that bagel seasoning is not meant just for bagels, but for pretty much anything you eat! So go and find out what other things you can combine with bagel seasoning to make it your new favourite combination!

💚Is everything bagel seasoning good for you? 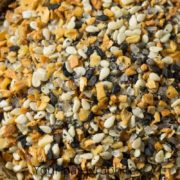