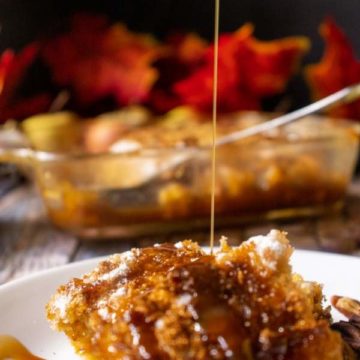 Guys, let's welcome the beautiful fall season with this Caramel Apple Cinnamon Pecan Cobbler. Apple Pecan Cobbler is like the most comforting fall recipe that we all definitely should try! But, have you tried this with caramel? I mean the taste gets so much better. Apples, Cinnamon, and Nutmeg form the filling then it is topped with caramel and finally, the cobbler topping adds to the taste and deliciousness.

I also prefer adding some more caramel on the top as it brings a beautiful caramel taste when you take a bite of it. All in all, this is a pretty easy fall dessert recipe that you can make in less than an hour's time.

It goes without saying that the best part about this recipe is the sweet, slightly tart-y, apple filling on the bottom with some tasty Cinnamon Pecan Cobbler topping.

I think you must have guessed by now how awesome the Cobbler would taste since I have added Pecans.

Pecans bring a beautiful nuttiness to your cobbler which makes every bite worthwhile...!

How to make this tasty Caramel Apple Cinnamon Pecan Cobbler?

Believe me, this recipe is gonna be a cakewalk for you.

First, make the filling - The Apples are folded in with a bit of lemon juice, Cornstarch, and some spices - Nutmeg and Cinnamon - and of course some brown sugar because our apples are a bit tart-y, so just to sort of sweetening them up.

Second, make the caramel. For the caramel, you will simply need to boil some milk, brown sugar, and butter in a pan. If you want, you can add a hint of vanilla for that beautiful smell. And, in no time your homemade caramel sauce will be ready!

Finally, to make the Cobbler Topping just combine flour with sugar - both brown sugar and granulated sugar - and some butter and some boiling water. Since this is a cobbler so we won't add oats. If we were making a crisp then we would have added some oats. Learn how to make Apple Crumble with Oats

Now just add this buttery goodness on your Caramel Apple filling. Then bake all of it until the top turns nice golden brown and cakey.

When I think of Fall, I cannot ignore Apples. This beautiful and crisp season of fall means its the best time to go apple-picking. And when you think of apples what is the first thing that comes to your mind? I am sure it is Caramel. Along with caramel, we cannot ignore Pecan nuts and Cinnamon. In fact, these four buddies are like the major four superstars for the beautiful season of fall.

But, can you imagine a recipe where we include all these four pillars? Well, yes! It's right in front of you. This Caramel Apple Cinnamon Pecan Cobbler will surely make your fall mornings worthwhile. Have you tried my Apple Pecan Cupcakes yet!

This simply tastes heavenly! Warm and bubbly Apple filling on the inside and cake-y cobbler topping on the outside, this Caramel Apple Pecan Cobbler recipe is simply outstanding. I mean you must have had many Cobblers but there is something so so so good about Pecan Apple Cobbler along with the Caramel. It's so comforting and so tasty. Makes your fall evenings worthwhile.

If you are making this recipe then please tag me on Instagram with #recipemagik and also please provide a rating to this recipe. 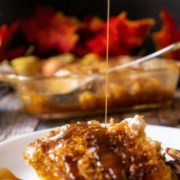