×
You are here: Home / Mediterranean / Authentic Greek Salad (Horiatiki/ Xoriatiki
Authentic Greek Salad is a simple and easy salad recipe which features chunky veggies like Cucumbers, Tomatoes, Red Onions, Bell Peppers and Olives. Also there are mega chunks of feta cheese which is the highlight of Greek Salad. Tossed with Olive Oil, Red Wine Vingear, Oregano and Salt this is such a simple and easy summer salad recipe.
Jump to Recipe Print Recipe 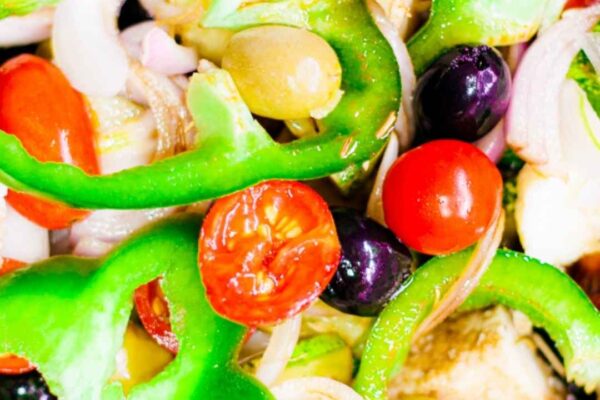 Easy and So refreshing Traditional Greek Salad is a healthy and scrumptious summer salad recipe. Made with just 7-ingredients, this is such a quick and easy salad recipe!

Simple yet full of flavors!

There is no much tossing required, no much cutting and chopping required and no lot of ingredients required for the dressing as well. Authentic Greek Salad is actually a really simple salad but huge on flavors.

Last May I had an opportunity to visit beautiful Santorini and it was beautiful beyond words. And one this that stood out to me most in this strikingly beautiful white and blue landscape was the simplicity of the people.

Living in one of these gorgeous homes and with the best couple on earth, I realized that the thing that keeps us happy the most is the simple and rustic food and lifestyle.

In fact in all of Mediterranean, One thing I have noticed is that Greek food is the only one which is super simple and yet so delicious. When you go further south, its simple in its own ways but still Greek cuisine boasts of simplicity and fresh produce.

What is traditional Greek Salad made of?

Horiatiki, or traditional Greek Salad is made of simple fresh seasonal produce like Bell Peppers, Tomatoes, Red Onions, Cucumbers, Olives and blocks of Feta Cheese. There is no salad base or lettuce added to this authentic Greek Salad.

What defines a Greek Salad?

Also big chunks of Feta Cheese is commonly added to the salad.

This simple combination is so delicious and refreshing in itself! Also with the feta added its typically served as a perfect lunch as well as dinner!

What is the difference between a Greek Salad and Mediterranean Salad?

Honestly there isn't much difference between a Mediterranean Salad and Greek Salad because Greece lies in the Mediterranean region and it only makes sense that they use the same produce to make a salad.

Although similar, but they are not identical. Greek Salad doesn't contain lettuce while Mediterranean does.

How to make an Authentic Greek Salad

Classic Greek Salad is such a simple and easy recipe which I love to make for my Summer BBQ Sides. It tastes especially good with Greek Grilled Chicken Recipe or Balsamic Grilled Chicken or Beef Shish Kebab or Grilled BBQ Shrimp Kabobs

Combine chopped veggies in a bowl. Do not toss them much

Top with a mega chunk of Feta

Top with a big chunk of Feta cheese cut into triangle or rectangle. Drizzle some Olive Oil and Red Wine Vinegar over it as well. Sprinkle some salt and dried oregano and serve!

What to serve Greek Salad with?

Talking like a true Greek, you can serve this Greek Salad anytime of the day and it makes for a meal in itself.

But I love to serve it with these tasty Greek and Mediterranean dishes!

Refrigerate: You can store leftover Greek salad in an airtight container int he refrigerator. This stays fresh in the refrigerator for upto a week.

Freeze: Do not freeze this salad as Feta Cheese really loses the creamy texture upon thawing.

Top Tips to make the Best and most Authentic Greek Salad 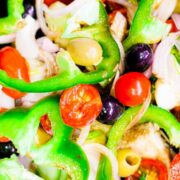