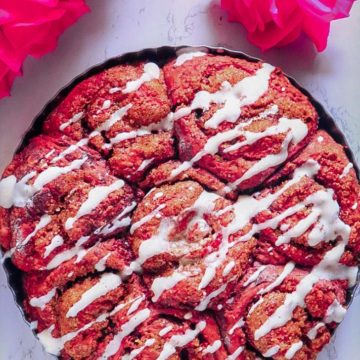 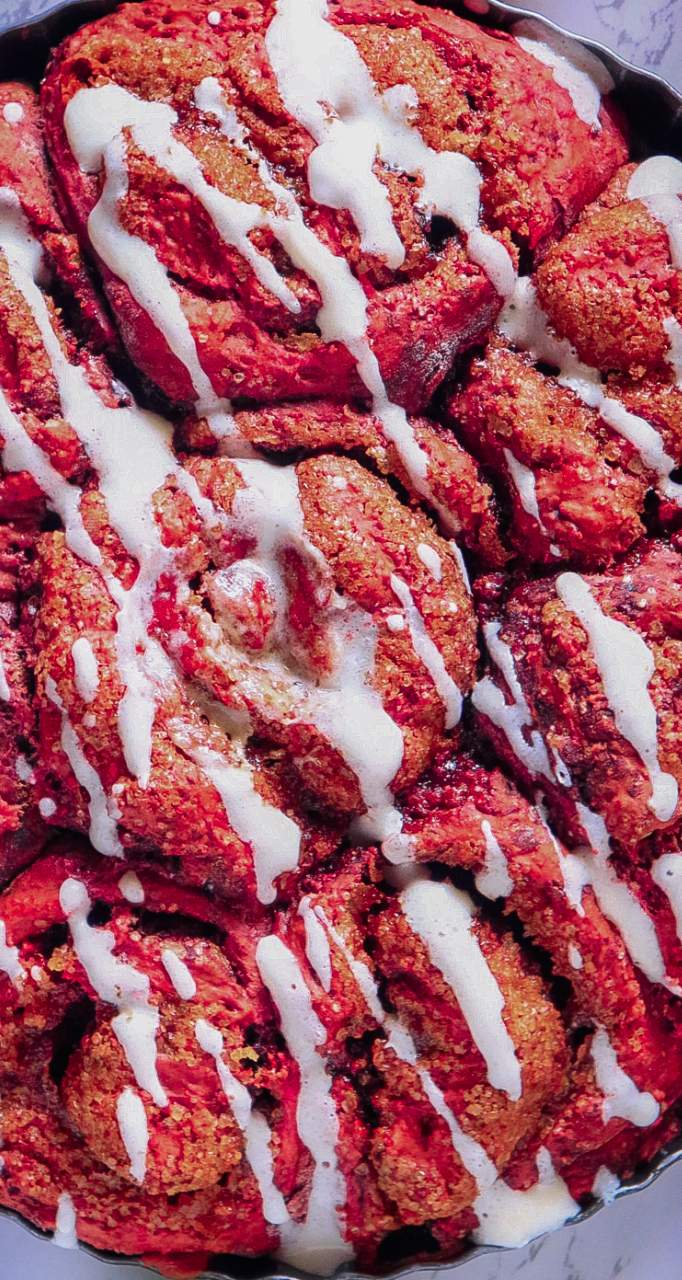 Now that Valentine's Day is around the corner, I thought, what could be a better dessert than Red Velvet Cinnamon rolls. right? It's so tasty. And, need more good news? These cinnamon rolls don't use artificial colors. They are made using beetroot puree. You can also use beetroot powder.

It's not that I've not used Yeast before. But, I thought about skipping yeast because yeast is not a common ingredient at my home. All of us don't have yeast in our homes all the time. 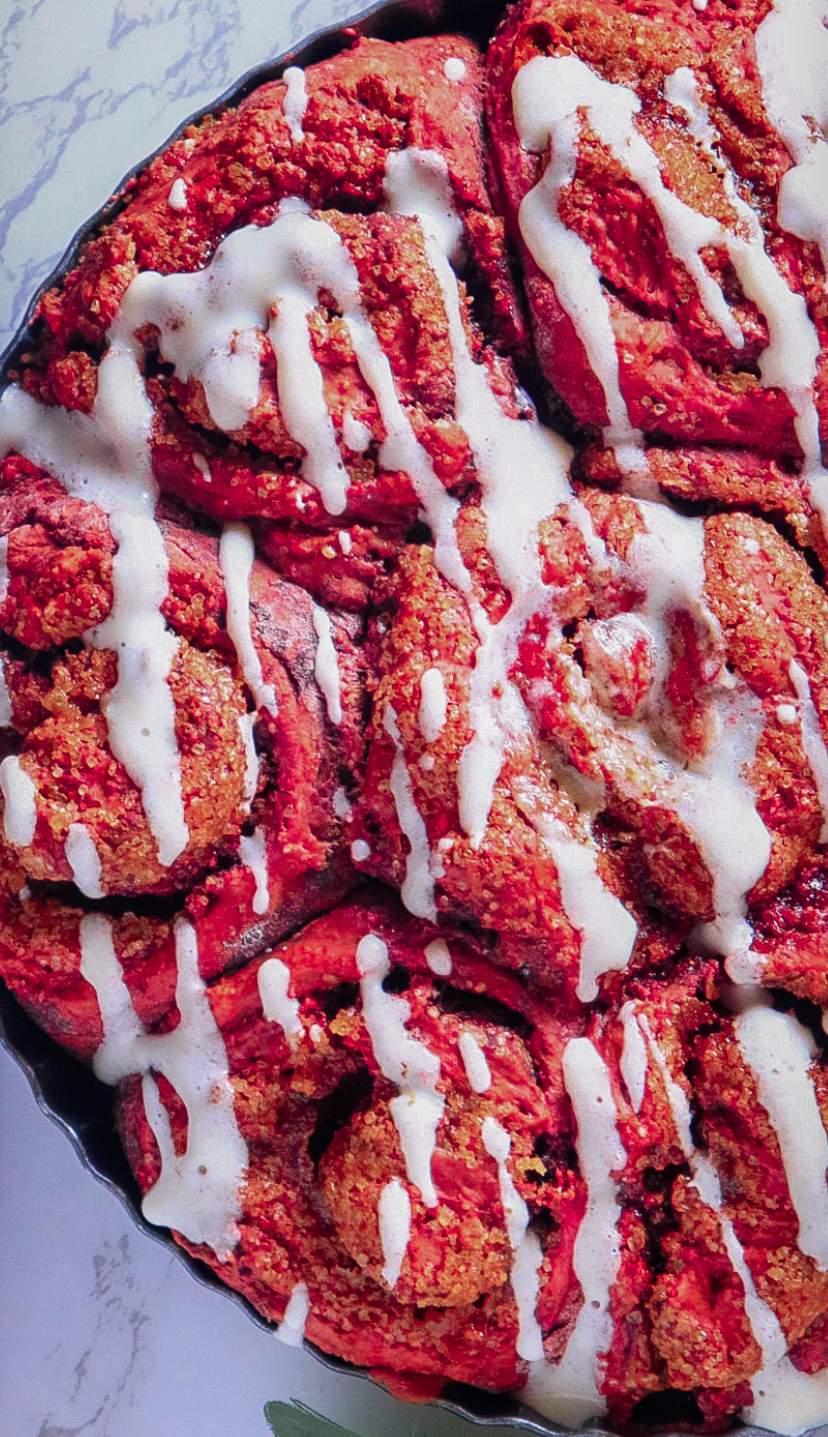 Trust me, these Warm, Pillowy Soft, Red Velvet Cinnamon Rolls are hard to say no to. Slathered with Cream Cheese Frosting they taste incredibly delicious. In my home, this cinnamon roll has become so popular that whenever my husband or my kids are in a good mood, I bake a batch of these cinnamon rolls. And, since you don't need yeast, you don't have to worry about running to the store every now and then to grab ingredients.

This recipe for Easy Homemade Red Velvet Cinnamon Rolls Without Yeast and Without Eggs is simply amazing.

How do You Make Cinnamon Rolls without yeast?

Well, the answer is Baking Powder and Baking Soda. I love baking without yeast. Have you tried  - No-Yeast Dinner Rolls (Pillowy Soft) or Pizza Dough Without Yeast

Trust me, once I learned how to replace Yeast, I felt so powerful. Almost invincible. I felt like writing a book on No Yeast desserts. Well, that's a far-fetched dream. But, I am gonna do that for sure. 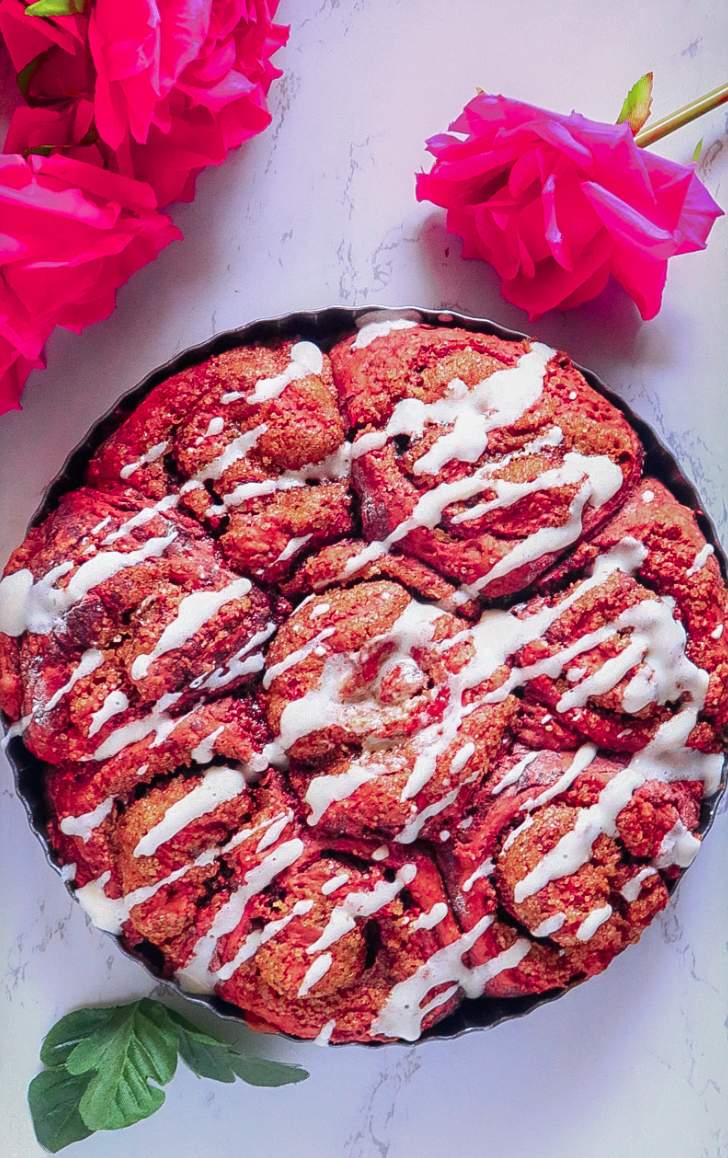 No Yeast? What would Cinnamon Rolls taste like, without Yeast?

Well, since there is no yeast, so there is not much of a rise. But, they have a dense, buttery, soft, and chewy texture. Moreover, this is Red Velvet Cinnamon Rolls. So, you got so much chocolate to look out for.

What Kind of Frosting goes best with these Cinnamon Rolls?

You can choose a variety of frosting. But, my favorite is Cream Cheese Frosting. You know, there is something so magical about cream cheese that once you slather it on your cinnamon rolls, they taste simply amazing. Not just cinnamon rolls, you can do cream cheese frosting on

If you are making this recipe, then please leave a rating below. Also, take a snap and share it on Instagram with #recipemagik. Tag us @recipemagik. 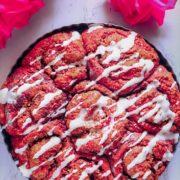 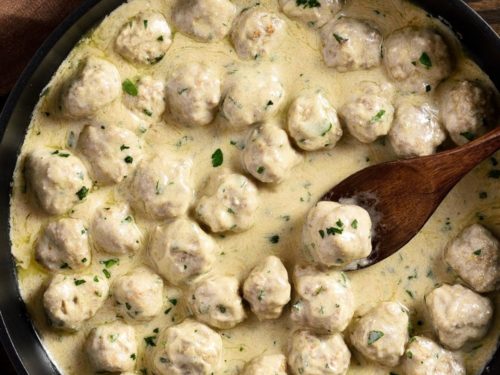