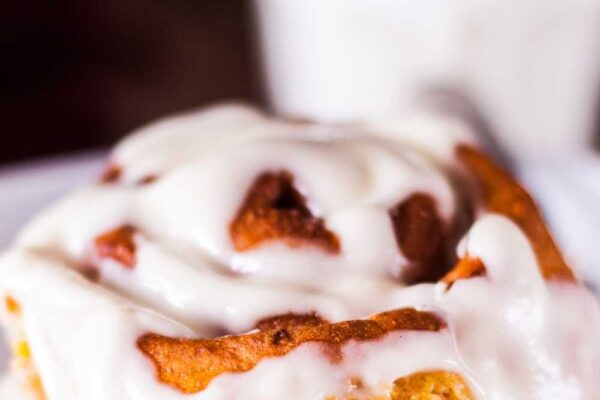 These are the Best Pumpkin Cinnamon rolls with Cream Cheese Frosting that you'll be baking. Chewy on the outside. Soft and Ooey Gooey on the inside.

In my home, during Christmas there is a tradition that we follow. Every year on 21st December we wake up at around 6:45 AM and all of get together to make the best ever Pumpkin Cinnamon rolls with cream cheese frosting.

Then we enjoy these cinnamon buns and go for ice skating. Later in the day we clean up the attic and look for things that reminds us of our good old past.

I think the popularity of Trader Joe's Pumpkin Cinnamon rolls comes from the fact that it's less time consuming and all you have to do is just place the cinnamon rolls in a baking dish and enjoy.

But, trust me, making them is equally fun.

Whether you want to recreate your happy family memories or want to send them over to someone or if you are like me and you are just doing this for your kitchen to smell like a magical fall wonderland. I totally understand.

Pumpkin Spice Cinnamon Rolls are irresistibly delicious and totally something that you can try.

To Make the Cinnamon Roll Dough

To Make the Filling

To Make the Frosting

Well, we all love those packed Pillsbury Pumpkin Spice Cinnamon Rolls. But, do you know that in real making them is actually quite fun and not as time consuming as you might imagine.

Making the best pumpkin spice cinnamon rolls is way easier than you imagine.

And, with this recipe pumpkin cinnamon rolls will be totally outstanding.

For your convenience I have divided the Pumpkin spice cinnamon rolls recipe into four parts.

Make the dough and let it rise (1st rise)

Roll the dough and Make the filling

note 2: you should be able to roll the dough easily. Meaning - it should be stretchable. This is the prime reason we are using yeast. If you find the dough is shrinking, then just stop rolling and allow the dough to rest further for another 20-minutes.

note 3: You want to under-bake your cinnamon buns a little. This will keep them ooey-gooey in the center.

How to freeze Pumpkin Cinnamon Rolls

Can I use Freshly Pureed Pumpkin for this recipe

Yes you can use freshly Pureed Pumpkin for this recipe. But, keep in mind that homemade pumpkin puree contains a lot of liquid. And, liquid weighs down the dough.

Roll the blotting paper in an outward direction and then you'll have homemade Pumpkin Puree that's in the best condition for use. 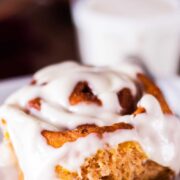 Roll the dough and Fill it up

The 2nd Rise (Cover and Let them rise again)

Note 1: Make sure you blot homemade Pumpkin Puree before using it. See blog post on how to blot freshly pureed pumpkin. Note 2: If using active dry yeast then your dough will take longer duration to rise. Note 3: You should be able to stretch the dough while rolling. If you are unable to stretch the dough while rolling, then it means the yeast isn't activated. So, cover and allow the dough to rise for another 20-minutes. Note 4: You want the cinnamon rolls to be slightly underbaked. This keeps them chewy on the outside and ooey-gooey, soft on the inside.