×
You are here: Home / Air Fryer / Eggplant Parmesan
Eggplant Parmesan - Sliced Eggplants coated in Panko breadcrumbs and (egg + milk) mixture, partially cooked in a skillet, and then layered in a baking dish (like you would layer a lasagna) with Marinara Sauce, and loads of Mozzarella Cheese.
Jump to Recipe Print Recipe

Eggplant Parmesan - Sliced Eggplants coated in Panko breadcrumbs and (egg + milk) mixture, partially cooked in a skillet, and then layered in a baking dish (like you would layer a lasagna) with Marinara Sauce, and loads of Mozzarella Cheese.

Generally, Eggplant Parmesan Recipe is just like Chicken Parm or Cauliflower Parm. It's just instead of Chicken or Cauli we are using Eggplant.

When this comes out of the oven, you see the bubbly cheese on the edges, that looks so inviting that you'd want to take a slice right away.

In my home, Baked Eggplant Parmesan is a total game-changer. Whenever I have made this, I have got happy faces and heard sweet nothings!

Eggplant recipes are my favorite. Just like this Eggplant and Zucchini Lasagna (Crockpot).

I know there are tons of Recipes out there for Baked Eggplant Parmigiana. But, if you want to learn how to make the BEST Eggplant Parmesan from scratch then you've come to the right place.

💡Tips to Keep in Mind:

Before we learn the steps involved in making Eggplant Parmesan. You need to have a look at these important tips. Most people skip these tips and what they end up with is soggy eggplant slices. I am sure you don't want that.

👩🏻‍🍳 How to Make Eggplant Parmesan

I know you are asking yourself how to cook Eggplant Parmesan. These step-by-step photos are going to make your work so much easier.

STEP 1: Season Eggplant and let them release the liquid

Season the top of your Eggplant with Salt and Pepper. Arrange them on a baking sheet lined with parchment paper. Allow them to sit for 1-hour so that they release all the liquid.

Once they have released all the liquid, wipe off the excess salt with a damp paper towel since you don't want them to be too salty.

The recipe for Eggplant Parmesan is so easy. But, most people make these mistakes. The major mistakes people make in this step are:

Take two shallow plates. Make Panko Mixture on one plate and egg mixture on another plate.

You can use any other spices that you like. Want some smoky flavors - add some smoked paprika. Add a pinch of Italian Seasoning for a better taste.

On another plate, combine milk and eggs. Stir well.

So, there you have it. Two basic things with which you are going to coat your eggplant slices.

First, dip both sides of Eggplant slices into Egg and Milk Mixture. Pick them up and place them in the Panko mixture. Shake off any excess. Place in a large baking sheet.

As you can see Eggplant Parmesan Recipe is so easy. All we are doing is coating eggplant in two mixtures. I really don't understand why people make a fuss about this.

To make the Best Eggplant Parmesan you must not forget the sequence in which we coated our eggplant.

If you don't have Panko breadcrumbs just get it. Generally, the regular breadcrumb contains corn syrup, sodium, and potential allergens. And, therefore it isn't healthy. So, to make Healthy Eggplant Parmesan consider using Panko Breadcrumbs.

Heat a pan with some Olive Oil. Once your skillet is hot, add eggplant slices. Just keep two eggplant slices at once. Do not overcrowd the pan. Cook both sides until they are golden brown.

Take them out on a plate lined with a paper towel.

Heads up, this is NOT a Fried Eggplant Parmesan recipe. The idea behind searing Eggplant is so that they get a crispy coating on the outside and do not get soggy when baked.

I learned this trick from "Table for Two Blog". And, trust me, this is the easiest way to make the Best Eggplant Parmesan at home.

STEP 5: Layer in a baking dish

Bake it in a preheated oven at 375 degrees F for 20-25 minutes or until cheese is browned and bubbly on top. Serve with freshly chopped basil on top.

Since there are so many layers of cheese, I am sure you are asking yourself, how many calories are there in Eggplant Parmigiana?

Well to simply put, Eggplant Parmesan is packed with calories.

NOTE: This is just an approximate calculation of Nutritional value for Vegetarian Eggplant Parmesan. The actual result may vary depending upon the cooking procedure and the ingredients used.

📖 Other Variations of this recipe:

Baked Healthy Eggplant Parmesan is so popular that it is bound to have variations. It is made worldwide with so many different ingredients and techniques. Let's have a look at them.

Can I Make Eggplant Parmesan without Eggs?

If you don't like Eggs you can skip them. You can just coat it in Milk. But, Eggplant Parmesan without Egg won't be as delicious as it would be with eggs. The reason being, Egg creates a protein matrix around Eggplant making them crispy on the outside.

🥗 What to Serve with Eggplant Parmesan?

If you are making this Eggplant Parmesan using this recipe, please leave a rating below. It will help me work on myself and my blog. Also, take a snap of your final Eggplant Parmesan once it is done and post it on Instagram with #recipemagik. Tag me @recipemagik and let me know how it turned out. 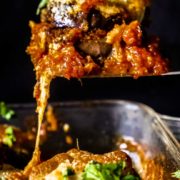