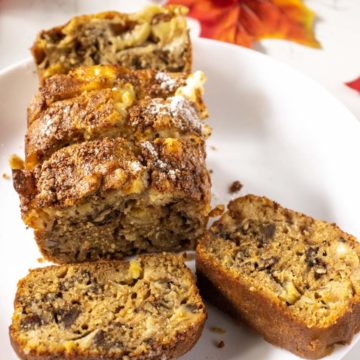 Cinnamon Apple Bread with Cream Cheese Swirl and Vanilla Sugar glaze is a classic fall dessert recipe that you can make in just no time. So easy and so flavorful.😋

The cinnamon along with Apple and Pecan makes an excellent combination for these fall months. Also try

Making this recipe is seriously easy and you can simply make this in no time.

I just love making this recipe. This is because I have always loved baking Apple Bread. With the gorgeous Autumn months rolling by, I think its a good time to actually make this Apple Bread.

I just love large Red Apples. I have never really liked Green Apples. They are tarty and not so sweet.

Yes, you can say that I have sort of a sweet tooth. But, there is something so good about using Red Apples.

And talking about this bread, this is so tasty you guys! There is a nuttiness because of Pecan, then there are the apples  - the star of the show which makes the recipe so good...!

Besides that, there is cream cheese. I guess, the cream cheese brings a beautiful creamy and tarty element to our bread and in return makes our bread much moist.

The addition of cream cheese also fills in for too much sweetness which would have happened since we are using Red Delicious Apples here.

👩‍🍳 How to Make Apple Bread?

To make the glaze you need to whisk sugar and milk along with some vanilla until you see a smooth white glaze.

Once your bread is baked and has cooled down to the room temperature you can use a whisk or a fork to drizzle the glaze on your bread.

Is it Possible to make it Keto? If so, how?

Yes, it is absolutely possible to make a Keto-friendly and low carb version of this apple bread. To make a healthy Cinnamon Apple Bread, you need to do the following replacements.

So, there you go guys, You can follow the recipe as it is and then do the following replacement to make a Keto Cinnamon Apple Bread.

Yes, You can surely make a gluten-free version of this apple cinnamon bread. All you have to do, is make the following replacements.

And, that's it guys. You can use everything else as it is. And, this will be your gluten-free Apple Cinnamon bread.

How Do I Store this Bread?

If you want to freeze it, then keep it in a freezer zip-lock bag and then pop it in the freezer. It will stay fine for 1 month.

If you want to consume in 2-3 days, then keep it in a Tupperware covered with a lid and pop it in the refrigerator. It should be fine for about a week.

My Bread Rises and then Collapses from the Middle

If this is the case with you, then I am going to tell you exactly why it happens. Don't fret about it. It has happened with me quite a few times but, then it is practice -  that has made me perfect.

So, there can be few reasons for that:

If you happen to make this recipe then take a snap and upload it to Instagram with #recipemagik. Also please take out few minutes to provide a rating for this recipe and comment below. 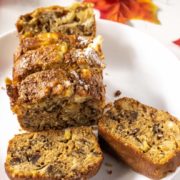 This recipe is partially inspired from - Butter with a Side of Bread.