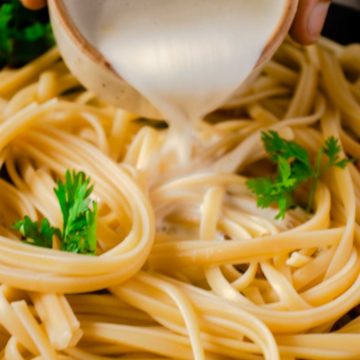 This is the easiest and the best Vegan Alfredo Sauce recipe ever! Creamy, luscious, and sooo delicious, Vegan White Bean Alfredo Sauce is Vegan, Low Carb, and Dairy Free. Super simple and so easy to make.

Vegan Alfredo Sauce made with a can of Cannellini Beans sounds like a dream come true and it's exactly that. Nothing short of your luxuriously rich, smooth, and creamy Alfredo Sauce. The same texture, nutty taste, and creamy richness in every spoon! Have you tried my Vegan Cauliflower Alfredo Sauce?

This Vegan White Bean Alfredo is so good that even the best of Omnivores and Carnivores are going to love this for sure. Simple and Super Creamy and made without a hint of Heavy Cream. So you do not have to worry about Carbs intake with every spoonful of this luscious Vegan Alfredo.

Whether you're Vegan or Not, a Low Carb Alfredo is surely something you can add to your dinner rotations. It's healthy but doesn't taste healthy! Have you tried my favorite Eggplant and Zucchini Lasagna (Crockpot) which is my favorite Low Carb Lasagna or this Eggplant Lasagna or this Crockpot Zucchini Baked Ziti (Low Carb) or Keto Bang Bang Zoodles which is a low carb noodle recipe or Orange Tofu (in Air Fryer) or Vegan Lentil Coconut Curry in Crockpot which makes for a fantastic and easy dinner option.

See the recipe card for quantities. Also, make sure you take a quick look at the video for a visual.

Hint: I like to use Gluten-Free, Low Carb Pasta for this recipe. There are plenty of Low Carb Pasta options available today, you can choose your favorite.

Label it and freeze it for 6 months. Thaw overnight in the refrigerator before reuse. 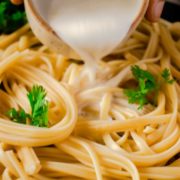