Generally, Zucchini Boats are stuffed with Ground Beef. But, since we are making vegan stuffed zucchini boats, we will replace ground beef with lentils. I have used red lentils since it cooks faster. You can replace it with green or brown lentils.

Instead of lentils you can stuff your Zucchini Boats with other Vegetarian ingredients such as corn or snap peas or black beans or Quinoa.

Zucchini is a summer squash that is widely grown here in the United States. And, it's super easy to grow at home. This recipe right here is made from fresh Zucchini that I grew in my garden. Isn't that amazing? Woohoo 🥳

Zucchini is rich in fiber and contains zero fat. It has so many nutrients, minerals, and vitamins such as vitamin A, B6, Riboflavin, and Vitamin C.

In my home, sometimes, my kids complain that Zucchini tastes bitter. But, looking at its nutritional value, I keep thinking about unique ways to incorporate Zucchini into our dinner.

As I said, since it's Vegan Zucchini Boats you can use Quinoa or Rice or Black Beans or Corn, or anything that you like. But, if any ingredients resemble closest to ground beef in terms of taste, it is Lentils. I am talking about red lentils here. You can of course replace it with green or brown lentils.

Look at the recipe card at the bottom of the post for quantities and see the video for a quick visual.

Here is how to make Lentil stuffed Zucchini boats with step-by-step images.

Step 2: Scoop out the center of Zucchini

Use a sharp knife and discard the ends. Next, slice them lengthwise. Use a measuring spoon or a scooper to scoop out the center leaving 1/4 inch of the border on all sides.

Heat a pan or a cast-iron skillet with olive oil. Once the oil shimmers add zucchini slices (skin side down) and sear until soft for 2-3 minutes. Flip over and sear the other side for another 2-3 minutes. Next, arrange them on a baking sheet lined with parchment paper. Set aside.

Step 5: Make the Filling for boats

In the same pan or Cast-iron skillet add chopped onions and garlic. Sauté for 2-3 minutes until they become soft.

Cook for another 2-3 minutes and then keep it aside.

Spoon Low carb Pizza Sauce into prepared zucchini. Then divide the lentil mixture into zucchini. Top with vegan cheese and bake uncovered in a preheated oven at 400°F OR 200°C for 8-10 minutes or until the cheese melts and becomes bubbly.

Spinach - You can add some sautéed baby spinach along with lentils to make the filling.

How Do you Freeze Zucchini Boats

Yes, Cooked Zucchini Boats can be frozen. You can freeze them for 2-3 months. Since they are vegan Zucchini boats and there are no dairy products involved therefore freezing them becomes so much easier. Just allow them to come down to room temperature. Then cover each Zucchini boat tightly with plastic wrap and place them in a freezer-friendly bag. They can be frozen for 2-3 months.

Can I make them Ahead of time

You can also Freeze uncooked Zucchini Boats for 2-3 months. Make the filling separately and keep it frozen. Similarly, scoop out the center of the zucchini, wrap it tightly in plastic wrap and place them in a freezer-friendly bag.

When ready to reuse thaw them in the refrigerator overnight.

Am I Supposed to Eat the Skin of Zucchini Boats

Well, you are not the first person to ask this question. Many people have asked - "Do you eat the skin on zucchini boats?" The answer is YES. Zucchini skin contains carotenoids which is basically a pigment that creates the bright green color in Zucchini. For us Humans, Carotenoids act as anti-oxidant. It's good for your skin. It's great for your eyes. Therefore do not peel off the skin.

How to Wash Zucchini

Before you begin using Zucchini, make sure you wash your Zucchini. Many people have asked - "How do you wash zucchini?". The answer is pretty simple. Run it under cold water and use your fingers to rub off any visible specs of dust. Dry it off with a paper towel.

How Do you Scoop out the center of Zucchini

This is probably the easiest and the most important part of this recipe. If you aren't able to hollow out your Zucchini it would be very difficult for you to get done with this recipe. And, you are not the first person to ask this question. Many people who are making this for the first time ask - "How do you hollow out zucchini?"

First, discard the unwanted ends and then use a sharp knife to cut them from the center lengthwise so that you create two flat sides. Then use a measuring spoon to scoop out the center of the Zucchini. You should definitely see the video (embedded below for a quick visual)

if you are making this recipe, then please leave a rating below. Snap it and share it on Instagram with #recipemagik. Tag me @recipemagik and let me know how this turned out. 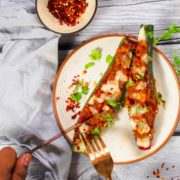