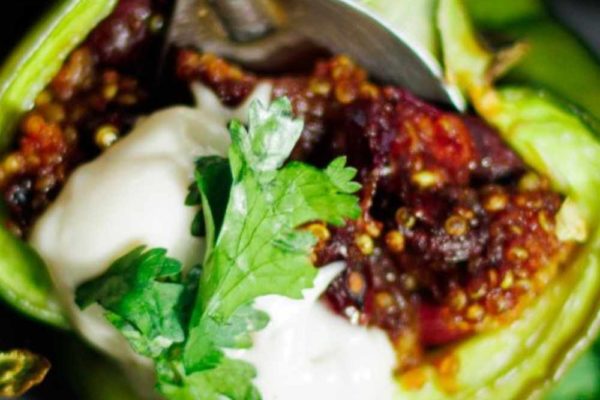 Our family has been making this easy stuffed peppers without rice or cauliflower or cheese for years!

The veggies and herbs gives a tasty kick. They should be a staple in every vegan’s diet.

These crispy stuffed peppers are great meatless meal and can be done in about 30 minutes. 🕦

Make sure you try these as well:

Have you been craving stuffed peppers but you don’t want to eat rice? 🍚

And for that meat-y ground beef like taste, I like to use canned, rinsed and drained pinto beans. Which of course can be replaced with black beans or Navy Beans.

I like to squeeze in this recipe at least once in a fortnight. It's so comforting and hearty. And, the best part - My Kids love it. ❤️

This year I've decided to hop on to this #Veganuary challenge. It's pretty amazing. 😍

So, I guess you'll be seeing a lot of Vegan recipes this January. I love how vegan culture and especially Plant Based recipes have become so popular these days.

My idea behind skipping rice was to skip the calories and fat count in rice.

Although, many might argue that you can use brown rice instead of white rice for healthy alternative.

But, I find quinoa more filling and of course healthy!

Quinoa is a superfood. Full of fiber and high in protein Quinoa makes an excellent substitute for rice.

So, if you are following a low carbohydrate diet or you’re on a gluten free diet there cannot be anything better than this vegan stuffed bell peppers with quinoa.

In this recipe for vegetarian stuffed bell peppers the stuffing has a pinch of chili powder, some ground cumin for that earthy taste, cayenne pepper for a hint of heat 🌶, and some tomato paste to bring it all together. ❤️

🎩Why You should be making this protein- and fiber-packed dish.

Vegan stuffed bell peppers beyond meat and an excellent meatless main course that deserves a place on your list.

Half Bell Peppers from stem to base and scoop out membranes and seeds.

Place Quinoa in a strainer and rinse under water until the water runs clear. This step helps remove the bitter outer coating known as saponin from quinoa. Drain and rinse and then place it in a skillet over medium high heat. I like to toast my quinoa for about a minute for a nuttier taste. Next, add vegetable broth (you can also add water) and bring it to a quick boil. Then reduce the heat, cover cook until the quinoa soaks up the water completely. It's that easy. 😌

Heat extra virgin olive oil in a large skillet over medium heat. I prefer extra virgin olive oil because it has less impurities and is a more refined version of regular olive oil. Now add in yellow or red onions and sauté until translucent. Add in garlic and cook until fragrant. Add in cayenne pepper, chili powder (I like to use my homemade chili powder), ground cumin, salt. Pour in tomato sauce and stir well until combined.

Stuff the filling in prepared bell peppers. Fill them all the way up to the top.

Bake in a pre-heated oven at 350 degrees F for 15-minutes or until the peppers are crispy.

🥦What to serve with quinoa stuffed peppers

You can serve this with the following:

Can I Make this in the Crock Pot

Yes. You can make vegetarian stuffed peppers with quinoa in the crockpot. But, I would prefer cooking the filling partially like we do in this recipe and then stuffing it in the peppers. Finally, place them in the crockpot and cook on low for 2 hours or on High for 1 hour.

Although, making this in the crockpot will take more time but is perfect when you are busy and want to run some errands in the meantime.

Another advantage of making this recipe in the crockpot is the peppers stay juicy and doesn't turn dry.

Can I make this in the Air Fryer

Of course you can make vegetarian stuffed peppers in the air fryer. Air Fryer stuffed peppers gets done in half the time and is super-crispy on the outside and juicy on the inside. You can see this - Jalapeño Poppers in Air Fryer recipe and take hints.

First bring your stuffed peppers with quinoa to room temperature. Allow them to cool down naturally. Then, wrap your Stuffed peppers in plastic wrap and place them in a tightly sealed airtight container. Now you can refrigerate them for 2-3 days.

Next, If you want to freeze them for a longer time, you should keep them in a freezer-safe container. This can stay fresh for up to 3 months. Allow it to thaw overnight in the refrigerator before reheating. 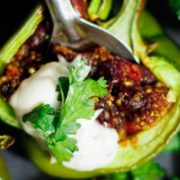 How to soak and cook  dry beans from scratch