×
You are here: Home / Mexican / Vegan Birria Tacos
Crispy, Cheesy, Warm and Comforting Vegan Birria Tacos are juicy on the inside and crunchy on the outside. It takes just 30-minutes from scratch to make these.
Jump to Recipe Print Recipe 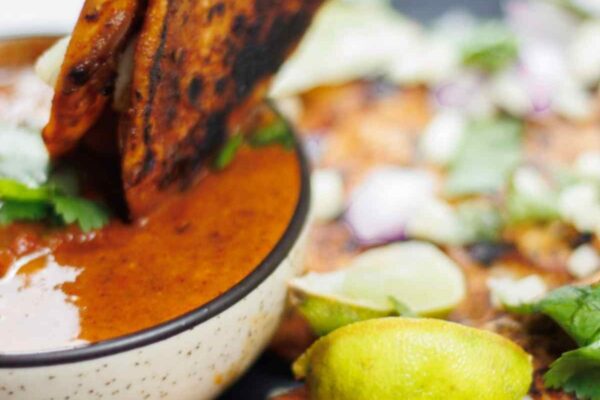 Basically, what we are doing here is making a savory, spicy, herby, and flavorful Mexican stew and stuffing it in our tortillas. Once it's stuffed in a taco shell, it is battered in the stew and then it is deep fried (both sides) until crispy, and then served with loads of vegan cheese, pickled red onions, cilantro and lots of fresh toppings.

When making Vegetarian Birria Tacos you can also use Jackfruit or crispy Oyster Mushrooms.

For an authentic experience enjoy this with some good tequila and some traditional Mariachi music. 🎸🪗

Birria de Res is basically a meat stew, that is bursting with flavors. But, today we'll be making Birria Quesatacos with consomé.

Generally, Birria Tacos are made with goat meat 🐐. But, due to unavailability of goat meat, people use beef 🥩 or lamb 🐑 or pork 🥓 these days. You can also use chicken to make chicken birria tacos. 🍗

Let me take you back in time to the 16th Century during "The Conquista".

Due to cultural exchanges between native Mexicans and the Spaniards 🇪🇸 the food culture of Mexico 🇲🇽 saw some significant changes.

The Conquistadors - one that conquers - brought new spices and animals that was not common on the other side of the Atlantic.

From sugarcane to rice 🍚 to wheat 🌾 to animals like goats, pigs, sheeps, donkeys and etc.

One such notorious animal was goats 🐐 which are called "chivos" in Mexico.

Soon enough goats became a source of nuisance for causing devastation to land and crops. They multiplied fast their meat was quite gamey.

But, due to the intense smell and gamey flavor of goat meat (especially older goat) people started using a lot of spices and herbs. 🌶🌿

The Mexican State of Jalisco is where all this magic happened and it is where Birria tacos originated.

Finally, people started using this as a taco filling and that's how "tacos de birria" was born.

Landing into Los Angeles they took the internet by a storm.

Trending weeks over weeks these cheesy, crispy, and crunchy Birria tacos soon became a sensation on the internet.📉

And, for a good reason.

These crispy Birria tacos dripping with sauce conquered the heart and soul of America.

These days you'll find Birria tacos trending all over the internet.

🥘How to Make Vegan Birria Tacos

Open the lid and scrape the sides. Add in Vegetable Broth and Olive Oil. Close the lid and blend again until smooth and velvety.

Stir in Apple Cider vinegar and pour half of it into a flat bottom dish.

Heat olive oil in a skillet and sauté Portobello/Oyster Mushrooms or Jackfruit until light brown and smells toasty.

Add in diced onions and garlic and cook until onions are transparent.

Stir in the remaining Birria Sauce that you have saved in step 1.

This is one of the authentic trademark step of Birria Taco. You have to toss your fresh corn tortillas in a flat plate with Birria sauce. Coat your tortillas in the sauce on both sides.

Place the tortillas in a large skillet over medium-high heat. Place the filling in the middle of the tortillas. Fold from the side. And Flip. Deep fry the other side until crunchy and crispy.

🍲Can I make this in the Slow Cooker

Yes. You can make your Vegan Birria Tacos in the slow cooker. Make sure you also try: Authentic Mexican Chicken Tinga (in Slow Cooker) and Crockpot Chicken Fajita

This step takes just 2-3 minutes. All you have to do is sauté your onions and garlic and then transfer it to a high speed blender. Add in all other ingredients (which are required to make Birria Sauce) and blend with vegetable broth, olive oil, and cider vinegar until smooth and creamy.

➽STEP 2: Pour it in the slow cooker

Pour half of the sauce in the slow cooker. Add shredded Oyster/Portobello Mushrooms or Young canned Jackfruit in brine (drained). Stir in diced onions and minced garlic.

Cover and cook on LOW for 2 hours. Shred the jackfruit using two forks and stir it together with the sauce.

Coat tortillas in the birria sauce. Place it in a skillet and fry until crispy. Add vegan birria filling and fold. Flip and fry the other side. This would take just 2-minutes.

🍴Can I make this in the Instant Pot

Yes. If you are running out of time and you want to reduce the cooking time then you definitely can make your Vegan Birria tacos in the Instant Pot.

Turn your Instant Pot to sauté mode. Heat olive oil and add onions and garlic. Cook until onions are translucent. Transfer to a high speed blender. Add in other ingredients including olive oil, vegetable broth, and cider vinegar. Blend until smooth, creamy, and velvety.

Add in shredded Jackfruit or Shredded Oyster/Portobello Mushrooms in the Instant Pot along with onions, and garlic. Pour in some of the Birria sauce. Stir to combine.

Close the lid and turn the pressure release valve from "venting" to "sealing" position. Press "Pressure cook" button and cook on High Pressure for 8-minutes. Allow pressure to release naturally for 10-15 minutes. Once the filling is cooked, open the lid and stir well.

Now if you want you can deep fry your tortillas on both sides after dredging them in the remaining sauce and then make your tacos. Or else to save time you can simply place the vegan Birria taco filling in a fresh corn tortilla and serve with some fresh toppings such as red/white onions, or sliced jalapenõs and lots of vegan cheese.

These important cooking tips will help you while you are making your Vegan Birria tacos.

What to do with remaining Birria sauce

You will always be having quite some Birria sauce. There are so many things that you can do with leftover consomé.

You can enjoy it with some refried beans and rice in the form of a Birria burrito. 🌯or You can use the same filling to make Birria Quesadillas or Birria Tostadas or Birria chilaquiles or Birria Enchiladas.

Consomé is basically the Birria Sauce. Really, consomé is the heart of the recipe. It's the stock that gives this meat stew all the flavors. When making Birria Quesatacos, taco is drenched in "Birria Sauce" or the "Consomé", stuffed with the filling and then deep fried on both sides until crunchy and crispy on the outside.

Finally, the leftover birria sauce or consomé is used as a dipping sauce for the taco.

☑️Is there a way I can store this?

Yes. However, it is very unlikely that you'd have to store your birria tacos. These "wet" tacos don't stay on the plate for long. 😂

But, you can store the filing separately in an airtight container. This stays fresh for up to 4-5 days in the fridge.

When ready to serve, make sure you warm it enough in the oven and then complete the remaining steps.

Looking for more taco recipes? You can try these 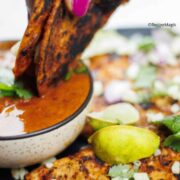