×
You are here: Home / Mexican / Taco Stuffed Peppers Recipe (Easy, Healthy, Delicious)
Get a heavy dose of veggies- and a little hearty protein- in these fun taco stuffed peppers. They’re a healthy dinner with a Mexican-inspired flavor twist.
Jump to Recipe Print Recipe 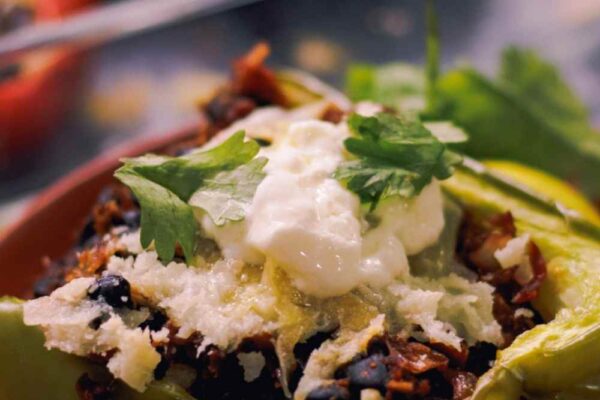 Taco stuffed peppers is one of the easiest low carb dinner recipes that you can make in under 30-minutes.

Topped with shredded Mozzarella Cheese, Shredded Cheddar Cheese, a dollop of sour cream, and some crushed doritos this stuffed peppers recipe simply couldn't get any better.

Replace ground beef with ground turkey or shredded chicken for a healthier choice.

Taco stuffed peppers make for a fun, tasty and healthy low carb dinner that anyone can make in less than 30 minutes. Made with beef, cooked rice, and cheese, these Taco Stuffed Peppers are a dieter’s delight.

High in Protein and Low in Carb this is a perfect diet food that's equally delicious.

Packed with fiber, vitamins, and protein. They’re low-carb, keto friendly, and most importantly they look gorgeous!

Well no kidding. I am nothing in comparison to her. But, her is a small attempt that's completely out of my own recipe book. Let's see if you like it.

How should I cut my peppers?

You have two options:

Should you cook peppers before stuffing them?

Yes. I get this question so often. How do you soften peppers before stuffing?

You have two options:

Why do you boil green peppers before stuffing them?

It is recommended that you boil peppers before stuffing them in order to cook them and make them soft.

Many people don't like the crunchy texture of bell peppers. In order to soften your peppers, just boil them in water for 2-3 minutes.

Remove from water and pat them dry using a paper towel.

And then, it's good to be used.

How do you make stuffed peppers not bland?

Stuffed Pepper can taste bland to some people. In order to improve its taste, I would love to share with you some ideas.

Can you freeze taco stuffed peppers?

Freezing Stuffed Peppers is easy. But keep these things in mind.

You can store your stuffed peppers in the freezer easily for up to 3 months. I personally don't like to keep them longer than 3-months.

When you are ready to eat those delicious taco stuffed peppers, cook in a preheated oven at 350 degrees F for 20-30 minutes or longer for up to 1-hour if you have large peppers. Basically, you have to cook them until completely thawed.

You want to make-ahead your taco stuffed peppers? You can easily do that.

When you are ready to indulge, transfer from freezer to a preheated oven at 350 degrees F. Bake for 20-30 minutes or longer.

Can you overcook stuffed peppers?

There are a few tips that you can keep in mind to avoid overcooking your stuffed peppers.

Do you cook stuffed peppers covered or uncovered?

I like to cook stuffed peppers uncovered but at optimal & appropriate temperature.

You can cook them covered if you want. Many might say that covered bells cooks evenly.

But, that's not true especially if you are cooking them in an optimal temperature.

What is a good side dish for stuffed peppers?

I would serve my stuffed peppers with: 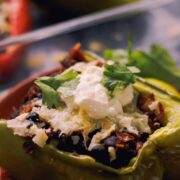