×
You are here: Home / Christmas / How to Make Classic Eggnog Recipe
This is the best homemade Eggnog recipe ever! Thick, Creamy and so comforting, homemade Eggnog is just the perfect recipe for Christmas treat.
Jump to Recipe Print Recipe 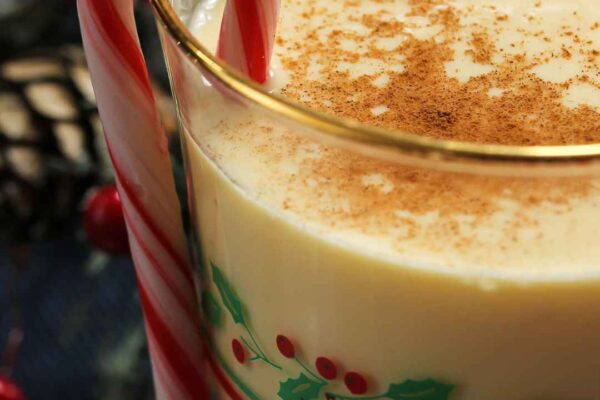 Classic American Homemade Eggnog Recipe is something you NEED for the Holiday season. Whether you are making Orange Spiced Eggnog Muffins or eggnog Cinnamon rolls, or any other Christmas dessert like this Eggnog Cheesecake Bites (NO-BAKE), Eggnog is something that adds a holiday punch to that.

Winter is just around the corner, meaning it’s eggnog season! Yes, we know it’s the Christmas season, but can you imagine Christmas without eggnog? No, right?

While many great eggnog brands are available at the market, nothing beats the homemade one.

But if only making eggnog was so easy!

Many people get grossed out that eggnog uses raw eggs, but our eggnog recipe is different.

Our eggnog recipe does not use raw eggs, making it safe for you and your family.

This Homemade Eggnog is sweet and creamy and will take you just fifteen minutes to make.

Eggnogs have a very old history to them.

We can trace their origins to the middle ages when the rich and elite used to toast to eggnog for their excellent health and prosperity, just like we do now!

What's the ingredients of Eggnog?

Eggnog is a classic Christmas recipe with Egg Yolks, Granulated Sugar, Milk, Heavy cream, and spices like Ground Cinnamon, Nutmeg, Cloves, and Kosher Salt. Many people spike it with beverages of choice.

Anyway, getting back to history, eggnog came to America during the 18th century.

Americans used to spike it with whiskey and rum, and the drink became so American that even George Washington served it to his guests!

Eventually, along the way, eggnog came to be recognized to be so traditional to Christmas.

What are the ingredients to make eggnog?

You should not have difficulty finding the following ingredients at your local grocery stores.

Although, when it comes to getting eggs, make sure you get pasteurized eggs, as they are the safest and will save you from any risk of getting salmonella.

See the recipe card for quantities.

How to make Traditional Eggnog?

Many recipes call for using raw eggs, but that’s not the case with this recipe. We will instead temper the eggs to make this eggnog.

This recipe is perfect for those who struggle with making eggnog with raw eggs or those who don’t like raw eggs.

Step 1: The first step is to crack open your eggs and separate the yolks of their eggs from the whites. Keep the egg whites aside, you won’t need them for making the eggnog. Meanwhile, put all the egg yolks in a medium-sized bowl.

STEP 2: Combine Granulated Sugar with Egg yolks. Use a whisk to beat them together until the egg yolks and sugar form a creamy mixture that is light and not too heavy.

Set this egg yolks and sugar mixture aside and pull out a saucepan. Place the saucepan over medium heat.

Add cream and milk to the saucepan and stir it for a few minutes. Then go ahead and add ground nutmeg and kosher salt. Start whisking the mixture again and keep doing it until you reach a simmering point.

STEP 3: Now, it’s time to temper the egg yolks. This will ensure your eggs get cooked but at the same time maintain that same consistency and not get curdled.

STEP 4: To temper the eggs, add one big spoonful of your hot milk mixture and then whisk it thoroughly. Then again, add one more spoonful of hot milk and whisk again. Keep repeating this process until all the milk is combined with the egg yolks.

STEP 5: Now put this combined mixture back into the saucepan over medium heat, and start whisking it again until it thickens just a little bit. Make sure you keep the heat low.

You can stop after the temperature reaches around 160 degrees Fahrenheit. Once that’s done, remove the saucepan from the stove and turn off the heat. Add the vanilla extract now and mix it as well.

STEP 6: Your eggnog is now mostly ready! Just pour it into a container and seal it with plastic wrap. Then let your eggnog chill in the refrigerator to thicken up more. 8.

STEP 7: Your eggnog is now completely ready! Just serve it with a sprinkle of cinnamon and a dollop of heavy cream. You can also go ahead and spike your eggnog with your preferred beverage!

Can I make vegan Eggnog?

Even if the name eggnog has ‘egg’ in it, that does not mean you can’t make it vegan.

All you need to do to make Vegan Eggnog is to replace regular milk with dairy-free milk and eggs with thick coconut cream.

For the topping, you can replace heavy cream with vegan whipped cream or coconut cream.

And that’s it, you are good to go with making vegan Eggnog!

How to make Keto Eggnog?

To make Keto Eggnog, I use Almond milk and Vanilla Protein Powder and zero calorie sweetener as a replacement for Whole Milk, Heavy Cream, and Granulated Sugar, respectively. Almond Milk Eggnog is so easy to make and just the best healthy Eggnog recipe you could ever ask for.

Almond Milk Eggnog is your perfect Lactose free Eggnog which you will absolutely LOVE!

How long does eggnog last in the fridge?

Can you freeze Eggnog?

YES! You can store Eggnog in an airtight container and freeze it for up to 6 months. The only thing is to keep a little room at the top of the bottle to allow it to expand when it freezes! Both store-bought and homemade Eggnog can be frozen.

What spice is most often used in eggnog?

How is Eggnog best served?

Generally Eggnog is served chilled and plain for a classic Christmas treat. You can garnish with a little ground Nutmeg, some fresh Orange Zest, Orange Peel, and candied Cranberries on top for a perfect holiday treat!

How to store eggnog?

Eggnog does not have a very long shelf-life, especially homemade ones, since they don’t have any preservatives inside them. Even then, you can preserve homemade eggnog for up to three days easily.

You must keep your eggnog constantly chilled to preserve it for the maximum duration.

Top Tips To Make the Best Eggnog at home

If you think that your eggnog has come out as too thick, then add a little milk to it and then blend it in a blender to get the desired consistency.

If you want to make very fragrant Eggnog then ground your own nutmeg and cinnamon at home. Freshly ground spices are much more fragrant than bottled ones.

Don’t use fat-free milk to make eggnog. Good eggnog has to be creamy and thick. But if you want to make healthier eggnog, you can consider using coconut milk instead. 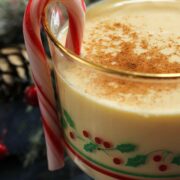 How to Make Classic Eggnog Recipe