Christmas is right around the corner and its the best time of the year. 🎄

Christmas time calls for some fancy and comforting breakfast since everybody is at home around the holidays!

And whats better for breakfast than a comforting, soft and fluffy gingerbread cinnamon roll! You couldn't ask for anything better than this! Its seriously the best Christmas Breakfast EVER!!!❤️❤️

Besides serving these Gingerbread Cinnamon Rolls for breakfast, it can also be served as a Christmas Brunch recipe to feed the crowd.

And these are not your average Cinnamon rolls. Infused with everyone's favorite gingerbread flavors, this is seriously so so so delicious! ❤️

How to make Gingerbread Cinnamon Rolls

Warm butter and milk in a pyrex jar. As the milk warms through, add the instant yeast and set aside.

Combine whole wheat flour with all other ingredients (except all purpose flour) and beat until combined in a stand mixer fitted with paddle attachment.

Gradually add the milk and yeast mixture and beat until combined. Add the all purpose flour and mix until a dough is formed and it starts to pull away from the sides.

Cover with a kitchen towel and let the dough rise for an hour.

Roll the dough into a big rectangle. Brush over with melted butter, sprinkle the filling.

Roll the dough and cut into 12 slices.

Make the cream cheese frosting and drizzle over the gingerbread cinnamon rolls.

Refrigerate: Leftover gingerbread cinnamon rolls can be stored in an airtight container in the refrigerator for up to 3-4 days.

Freeze: Gingerbread cinnamon rolls can be frozen for up to 3 months. The best thing would be to wrap un-frosted cinnamon rolls, wrapping individual slices in plastic wrap.

Thaw overnight in the refrigerator before serving.

How to Make Ahead Gingerbread Cinnamon Rolls?

These gingerbread cinnamon rolls are a fantastic make ahead recipe as it gives time for the rolls to rise and puff up.

You can arrange rolled cinnamon rolls in a pan. Cover with a plastic wrap on top and allow them to rise overnight for best results. 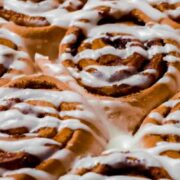 Here's how to make the Perfect Cream Cheese frosting