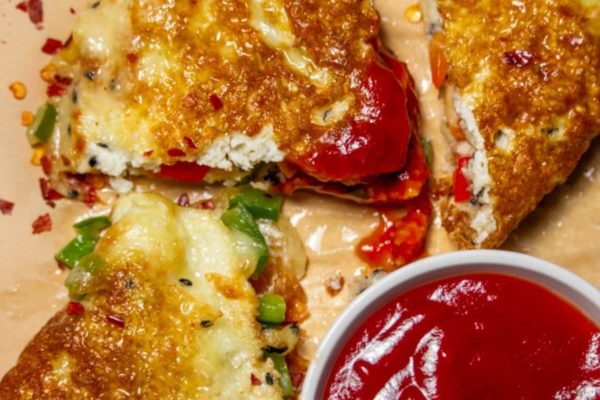 Egg White Breakfast Quesadillas or Egg White Omelet Quesadilla is a healthy breakfast quesadilla recipe that is so damn good! Packed with Non-Meat Protein such as Eggs and Cheese this Omelette quesadilla recipe is something that can be a part of your Flexitarian Diet. This recipe uses no tortillas at all. Rather instead of tortillas, I have used Egg whites to make an omelet. This works like healthy tortillas and tastes so delicious. Also, it's naturally gluten-free, Keto-friendly, Low Carb, and high in macro proteins. Also try: Keto Bang Bang Zoodles, KETO Zucchini Meatballs (No Breadcrumbs), Keto Buffalo Chicken Casserole, Keto Cauliflower Tater Tots

What are Egg White Quesadillas

Basically, they are just like Quesadillas but instead of Tortillas, we are going to make an omelet and use it as our tortilla. Sounds fun and interesting, right? Well, guess what, it is healthy too. You save yourself from so many unhealthy carbs that you get from a tortilla and you substitute that with the goodness of non-meat protein like Cheese and Eggs.

There are just 3-steps in this recipe.

This has become my favorite recipe ever since I have tried it. It's super-easy, low carb, healthy, and takes hardly any time.

If you are looking for a healthy breakfast quesadilla recipe, then this is it. This recipe right here is a boon for you. Just like this healthy Vegan Tuna Salad Sandwich, Healthy Zucchini Muffins with Chocolate Chips, Healthy Air Fryer Corn on the Cob, Healthy Quinoa Fried "Rice" with Crispy Tofu, Healthy White Bean Enchilada Soup, Healthy Apple Cider Cinnamon Rolls

It's something that you wouldn't want to share with anyone. Enjoy this with a glass of fresh fruit juice and you have a healthy breakfast for yourself.

And, that's not it. We are not using Egg Yolk. We are using Egg whites. Egg whites are a better source of protein than egg yolks.

Preheat the skillet over medium-high heat. Grease it with non-stick cooking spray. Add whisked egg whites and everything bagel seasoning. Do not touch for another 2-3 minutes.

Add Chopped Bell Peppers and Shredded Mozzarella Cheese on one side of the omelet.

Fold Omelet in half and then flip over. Cook both sides until lightly golden brown and then take it off the skillet.

Step 4: Cut them into Quesadillas

Use a Pizza Cutter to cut them in the shape of a Quesadilla. Serve with Ketchup.

I don't recommend storing this. Since this is such an easy recipe, you won't need much time to actually make it. And, it's not that we can't store it. We definitely can store them. But, the cheese won't taste as cheesy, melty, and tasty as it would in a freshly made version.

In this recipe, there are few tricks that will make it easier for you to get it done.

You can serve this Egg White Omelet Quesadillas with Ketchup. It tastes the best with Ketchup. But, if you want to get creative, you can try it with Yum Yum Sauce {Japanese Steak House Style} or sour cream or Greek yogurt. 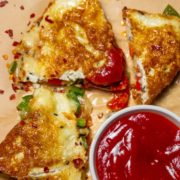 gg White Breakfast Quesadillas or Egg White Omelet Quesadilla is a healthy breakfast quesadilla recipe that is so damn good! Packed with Non-Meat Protein such as Eggs and Cheese this Omelette quesadilla recipe is something that can be a part of your Flexitarian Diet.
No ratings yet
Print Pin Rate
Prep Time: 4 minutes
Cook Time: 10 minutes
no resting time required: 0 minutes
Total Time: 14 minutes
Servings: 4 quesadillas
Calories: 189kcal
Author: Anjali