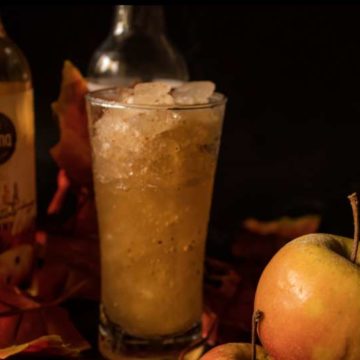 Easiest Apple Cider Slushie is a spicy, zesty, and refreshing Slushie that is perfect for Fall mornings or Thanksgiving Day. It's such a simple recipe to make. Also, it's so healthy. A spicy twist to the usual Apple Cider with Cinnamon and Lemon Juice makes it zesty and so refreshing! Its just perfect with some Cinnamon Sugar Donuts.

The weather is quickly changing. It's starting to get colder every day. It's so early this year.

The Fall season has set in quite unexpectedly early this year. The changing leaves and the snow is a gentle reminder of how quickly the year went by!

Last Night, while I was home watching something on the TV, I got up to see if I had anything in the refrigerator that could quench my thirst. I found this old bottle of Apple Cider tucked away in a corner in my refrigerator.

I just reached out for the bottle and thought of making myself an Apple Cider Slushie. This was not something that I had made before. But I have made so much Slushies all summer long, that I thought, this Apple Cider Slushie is the perfect way to enjoy this changing season. A perfect cross between the summers and fall.

Apple Cider is also one of the healthiest Vinegar there is. This helps in Weight loss, reduces blood glucose level, and blood cholesterol level. This is one of the best ways to enjoy Apple Cider at home.

Apple Cider is one of my favorite Fall go-to ingredients. Be it for just a drink or coffee or desserts and of course doughnuts. I love working with Apple Cider. In fact, my kids love it too. Have you tried my

Apple Cider Slushie is the easiest ever end of summer - beginning of Fall drink. So simple yet bursting with warm fall flavors. There is the chill of the ice and the warm Fall spices, which makes it such a great combination.

Also, Apple Cider is so healthy. Especially if you can have it every day in the morning, it kills tiredness, energizes you, and warms up your body. Especially, the Fall season can bring with itself some cold and allergies. This. Apple Cider slushie will help you feel comfortable and healthy.

After the ned of a long day or before I start my day, I like to drink a glass of this Apple Cider SLushie. It's so relaxing and so good for your health.

Also, Apple Cider Slushie makes for the perfect drink during thanksgiving which even the kids can enjoy! Its got the perfect punch which kids are going to love for sure.

And what better way to keep kids excited during thanksgiving day than a glass of chilled Apple Cider slushie.

How to Make the Easiest Apple Cider Slushie

Making Apple Cider Slushie is truly a breeze. There are so many different ways to make it. However, this is my version of the same.

You start by taking up the Apple Cider in an Ice Tray. Freeze it for about 45-50 minutes. Then take it out and fluff it lightly with a fork.

Add some Cinnamon and Lemon juice to it and mix well.

Re-freeze it for about 45 minutes to 1 hour.

After 1 hour, take it out, fluff it, and serve it in a tall glass.

So, that's all about it. This is how you make a quick and easy Apple Cider Slushie.

I hope you liked this recipe. If you happen to make this recipe, then please tag me with #recipemagik on Instagram. Also, rate this recipe and comment all your opinions and suggestions below!

Other Apple Recipes you can try: 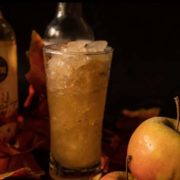